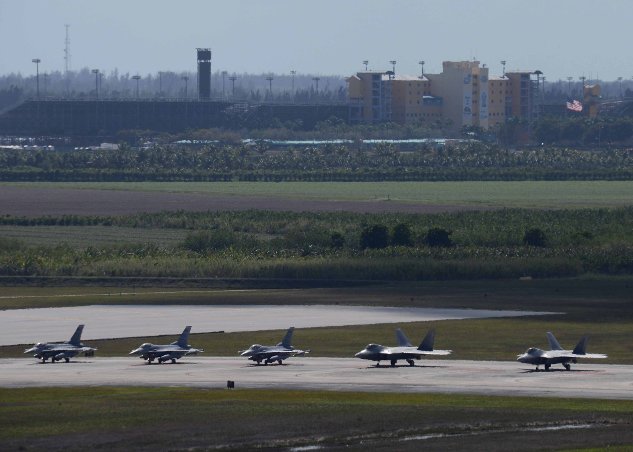 While the training wrapped-up Wednesday, members from Tyndall Air Force Base, Fla., ventured to the base for the exercise. Airframes participating in the exercise included T-38s, F-22s, and Homestead’s own F-16s. Maintenance and air crew operators were brought together to practice various combat scenarios.

„Our temporary duty assignment here has been a great training opportunity for everyone involved in the maintenance and fighter squadrons,” said Maj. Bryan Dick, 301st Fighter Squadron assistant director of operations at Tyndall AFB. „Exercises like CHUMEX allow us to train exactly how we will fight in combat, as an integrated fourth and fifth generation fighter package with active duty and Reserve fighting side-by-side.”

Dick said part of their tactics include working together to mitigate risk and take out the enemy. That type of teamwork and coordination takes practice, he said.

Beyond the skies, maintainers also get real-world training on the ground.

„Our guys get a sense of what a deployed environment will feel like; we’re in a new place, and have to set everything up and troubleshoot quickly,” said Master Sgt. Darrik Thompson, 325th Maintenance Squadron advanced programs access manager, Tyndall AFB. „This kind of training makes us so proficient we can just go where we have to go and do what we have to do to accomplish the mission.”

Members of the 482nd Fighter Wing recently returned from Combat Archer at Tyndall AFB where they fired live air-to-air weapons. Capt. Bryan Beasley, a pilot with the 495th Fighter Group, Det. 93 here, said CHUMEX is more of a large force exercise where they practice air-to-air missions in a beyond-visual range arena.

„We are getting solid, joint environment training and learning lessons that will enhance our lethality, survivability and ultimately the national security of this great country,” said Beasley. „No matter what happens in the air we’re learning a lesson that will mean life or death in actual combat.”

The F-22 Raptor is the Air Force’s newest fighter aircraft and combines stealth, supercruise, maneuverability, and integrated avionics, together with improved supportability and represents an exponential leap in warfighting capabilities according to its factsheet. The Raptor performs both air-to-air and air-to-ground missions allowing full realization of operational concepts vital to the 21st century Air Force.

The F-16 Fighting Falcon is a compact, multi-role fighter aircraft. It is highly maneuverable and has proven itself in air-to-air combat and air-to-surface attack according to its factsheet. It provides a relatively low-cost, high-performance weapon system for the United States and allied nations.

The T-38 Talons were mostly aggressors during the exercise. According to their factsheet the T-38 Talon is a twin-engine, high-altitude, supersonic jet trainer used in a variety of roles because of its design, economy of operations, ease of maintenance, high performance and exceptional safety record.

„We’re adding more firepower to the fight and using all the technology available to take out the enemy,” said Beasley. „We combine our strengths to help each other out.”

As a wing, the 482nd is a fully combat-ready unit capable of providing F-16C multi-purpose fighter aircraft, along with mission ready pilots and support personnel, for short-notice worldwide deployment. CHUMEX is just one exercise that teaches Airmen the skills needed to be able to achieve their mission in a deployed location.