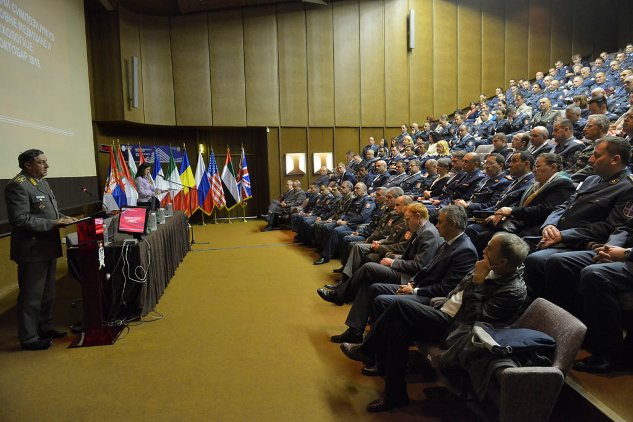 Chief of the General Staff of the Serbian Armed Forces General Ljubisa Dikovic opened today (15.10) at the Military Medical Academy 11th International Symposium on aviation medicine and psychology. The symposium is organized by the Air Force and Air Defence Command, and the expert meeting was organized on the occasion of 70 years of existence of the Institute of Aviation Medicine.

At the symposium, besides national, experts from the armed forces of 11 countries – Algeria, Austria, Bulgaria, Great Britain, Egypt, Italy, Romania, the Russian Federation, the United States, the United Arab Emirates and France are participating.

General Dikovic welcomed the symposium participants and wished them successful work. He said that the history of Serbian aviation medicine is strongly associated with the tradition of the Serbian Air Force and part of that tradition is the famous Serbian Duke Radomir Putnik, whose signature in 1912 strengthened the decision on the formation of the Air Force Command. This, as General Dikovic said, the Kingdom of Serbia became one of the few countries that had the Air Force as a part of the armed forces.

At that time, the seeds of Serbian aviation medicine were also planted, although the Institute of Aviation Medicine was founded 70 years ago.

– Decades of history of the Institute of Aviation Medicine were written primarily by all its members, eminent specialists, masters and doctors of medical sciences, professors and top specialists in the field of aviation medicine. The dedicated work of those who founded the Institute and their entire lifetime dedicated to the development of aviation medicine, has not been forgotten. On the contrary, today’s generations of members of the Institute of Aviation Medicine are proud of them, they look up to them and firmly pace into the path of future that was traced by their predecessors, because it is the only way for successful functioning and progress of serious institutions such as the Institute – General Dikovic said.

Chief of General Staff emphasized the international character of this symposium, which indicates that medicine and science know no borders.

More details on the Institute of Aviation Medicine, the significant progress in the work of the institution, its development and equipping over decades, changes of address and procurements of more and more sophisticated equipment were provided by Chief of the Institute Colonel Prof. Dr. Miroslav Pavlovic.

During the working part of the symposium, seven participants from abroad and 14 national participants presented the latest achievements in the field of aviation medicine and psychology.

The Eleventh International Symposium on aviation medicine and psychology is focused on the following topics: the selection of candidates for the Air Force Academy, physiological training of pilots, aviation physiology and psychology, human factor in aviation and flight safety, aviation medical evacuation and air crew, skills assessment and medical standards.

On the second day of the symposium, participants of the expert meeting will visit the airport „Batajnica” and the cabinet for air-physiology, which belongs to the Institute of Aviation Medicine.