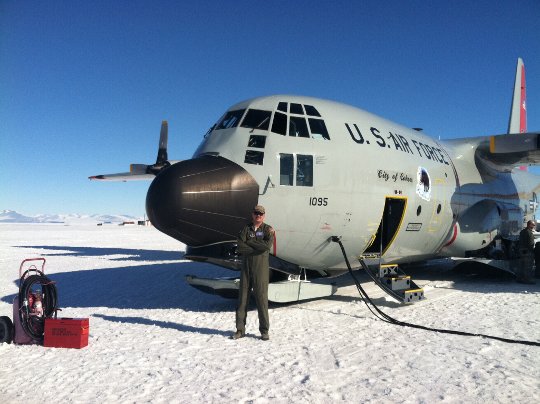 C-130 Hercules is a true workhorse for many armies in the world. The same is true also in the U.S. where these machines are used for various tasks, including very special one. One such exceptional task is to support the mission at both poles. C-130 designated as LC-130 and used in the 109th Airlift Wing is characterized by skids allowing takeoffs and landings on snow and additional booster rocket engines to assist the start in extreme conditions.

My father’s parents (Sala) were born in the United States, however, they kept up their polish heritage, attending St Agnes church and living in a Polish Community in Cohoes N.Y. My father’s brother and sister did not keep up with speaking Polish, partly as convenience for their parents. My grandparents used Polish to talk about the kids when they didn’t want them to know what was being said. HAHA

As for my mother’s parents (Szozda), they, along with my three uncles and my mother, immigrated to Cohoes, N.Y. in 1951. I know that in Poland my grandparents were farmers when they were young and that my grandfather Jan Szozda was in the Polish Army. He was captured during WWII and spent time in a POW camp. He was hesitant to share details about those years and did not talk about being in the Army or in the work camp at all, so that part of our family history remains a mystery.
– When have you decided to become a pilot?

I had always wanted to be a pilot since I can remember, but becoming a pilot is an expensive undertaking to do on your own. When I was in high school I found out about the Air National Guard, a component of the US Air Force. Across the country most states have an Air National Guard component. At these bases there some active duty military members and also a large group of guardsmen. The guardsmen are considered part-time personnel. In the Air National Guard there is an educational benefit that if you enlist as a guardsmen, the military will help pay for your college education. Also, to be an officer, and therefore a pilot in the Air Force, you need to have at least a Bachelor’s degree.
Once I had learned about the 109th Airlift Wing, which was local in my area, the requirements for getting my foot in the door as a pilot, and the support they provide for dreamers like me, I knew that the guard was the answer to my dream of becoming a pilot.
So, with help of the Air Force, the military paid for my education while I went to school and worked as a mechanic part-time on the airplanes here at the unit. Upon achieving my degree I then applied for and was selected to attend to pilot training.

– Where cargo planes your first choice?

I had wanted to fly the A-10 Thunderbolt. But now that after flying this airplane I would not change planes for anything.

– Your unit is a very special one – C-130 with rocket boosters and skis are not common. Was it hard to get to this unit?

Yes our unit is very unique. We are the only C-130 unit in the world that has skis on our aircraft and we are the largest aircraft in the world that lands on skis. The rocket boosters are called Assisted Take Off Motors or simply ATO. The flying squadron is very selective in the individuals that we choose to join. The challenges of flying in the Arctic and Antarctic are very demanding, takes constant training and a certain mindset of the individuals that fly in those conditions.

– Hercules is a very robust aircraft but the conditions in which you have to operate are extreme. Does this put much more strain on the airplane?

The cold temperatures put a strain on every facet of our operation. Taking off on the open snow can be very rough and there is always potential to damage the aircraft even though it is reinforced in certain areas to tolerate the extra stresses. Other than the shear physical strain on the aircraft there is an immense strain on our maintenance personnel while we are deployed to Antarctica. There are no hangers where the planes are located so every bit of preventative or actual maintenance that needs to be completed is done OUTSIDE in the harsh environment. You can imagine how difficult something like an engine change could be.

– Does using skies and rocket booster put much more work on you and your copilot?

When an ATO take off is performed there is an added work load to the crew. It is incumbent upon the pilot to know exactly when to call for the rockets to be fired. If fired to early then there will not be enough thrust added to get off of the snow. If lift off is not accomplished then the motors are wasted. Using ATO is a last ditch effort in getting out of camp and is considered our last resort.

– Who is responsible for launching the boosters?

– As I understand it they work on solid fuel so once started you cannot stop them. Can they be somehow ejected while running if an emergency situation emerges?

The LC-130 D model had the capability to eject the rockets. Our current H model cannot. This is because on the D model the rockets every so often would eject unintentionally. As for emergencies the rockets are simply just a glorified solid state rocket motor like one you would put on a model rocket. They ignite and burn with very good consistency and reliability. However we are trained to handle different emergencies if they were to misfire.

– Is handling the rocket boosters complicated for the loadmaster and the rest of the crew?

Loading the ATO can be challenging depended upon the location where you may be putting them on. They are heavy and the highest mount on the aircraft is over 7 feet off the ground. When it comes time to load them the whole crew works as a team to put them on. They are simple to load into the mounts once you get them up and into position.

– Do you always use rocket booster while starting from snow or sometimes the engine power is enough?

Like I mentioned earlier we use the motors as a last chance effort to depart an austere location. On a day-to-day basis the aircraft has been designed and is powerful enough to take off on its own.

– How long much snow do you need to start with and without rocket boosters to start?

Thank you for the interview!

McMurdo Station, Antarctica – New York Air National Guard pilot, Maj. Matthew J. Sala, from the 109th Airlift Wing in Scotia N.Y. poses in front of an LC-130 Skibird at Pegasus Field in Antarctica before leaving for a flight to the South Pole, 3 Jan 2014. The 109th Airlift Wing has been deploying to Antarctica as part of Operation Deep Freeze since 1988, helping the National Science Foundation transport equipment and personnel to science camps across the continent. (Air National Guard photo by Tech. Sgt. Christopher C. Collins/Released)