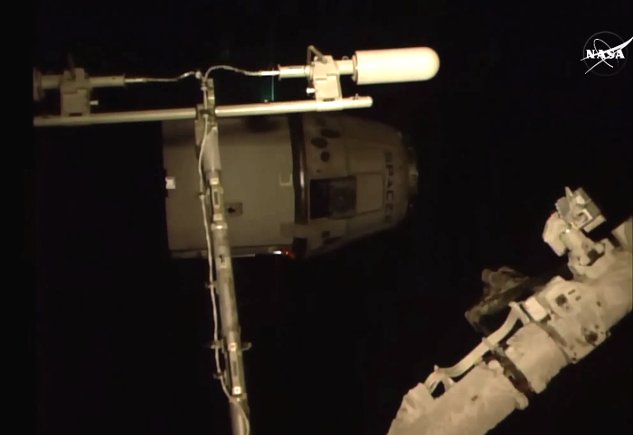 A SpaceX Dragon cargo spacecraft splashed down in the Pacific Ocean at 2:51 p.m. EDT Wednesday, May 11, about 261 miles southwest of Long Beach, California, with more than 3,700 pounds of NASA cargo, science and technology demonstration samples from the International Space Station.

The Dragon spacecraft will be taken by ship to Long Beach where some cargo will be removed and returned to NASA, and then be prepared for shipment to SpaceX’s test facility in McGregor, Texas, for processing.

A variety of technology and biology studies conducted in the unique microgravity environment of the space station returned aboard the commercial resupply spacecraft, including research in the burgeoning field of nanotechnology. The Microchannel Diffusion study, for example, examined how microparticles interact with each other and their delivery channel in the absence of gravitational forces. In this one-of-a-kind laboratory, researchers were able to observe nanoscale behaviors at slightly larger scales – knowledge which may have implications for advancements in particle filtration, space exploration and drug delivery technologies.

CASIS Protein Crystal Growth 4 also has applications in medicine – specifically, drug design and development. Growing protein crystals in microgravity can avoid some of the obstacles inherent to protein crystallization on Earth, such as sedimentation. One investigation explored the effect of microgravity on the co-crystallization of a membrane protein with a medically-relevant compound in order to determine its three-dimensional structure. This will enable scientists to use “designer” compounds to chemically target and inhibit an important human biological pathway thought to be responsible for several types of cancer.

The spacecraft also returned to Earth the final batch of human research samples from former NASA astronaut Scott Kelly’s historic one-year mission. These samples will be analyzed for studies such as Biochemical Profile, Cardio Ox, Fluid Shifts, Microbiome, Salivary Markers and the Twins Study. Additional samples taken on the ground, as Kelly continues to support these studies, will provide insights relevant for NASA’s Journey to Mars as the agency learns more about how the human body adjusts to weightlessness, isolation, radiation and the stress of long-duration spaceflight.

The spacesuit worn by NASA astronaut Tim Kopra during a January spacewalk also was returned for additional analysis by engineers on the ground, as NASA continues to investigate the source of water that caused and early end to the spacewalk after Kopra reported a small water bubble inside his helmet.

Dragon currently is the only station resupply spacecraft able to return a significant amount of cargo to Earth. The spacecraft lifted off from Cape Canaveral Air Force Station in Florida April 8, and arrived at the space station April 10, carrying almost 7,000 pounds of supplies and scientific cargo on the company’s eighth NASA-contracted commercial resupply mission.

The International Space Station is a convergence of science, technology and human innovation that demonstrates new technologies and makes research breakthroughs not possible on Earth. The space station has been occupied continuously since November 2000. In that time, more than 200 people and a variety of international and commercial spacecraft have visited the orbiting laboratory. The space station remains the springboard to NASA’s next great leap in exploration, including future missions to an asteroid and Mars.

Get more information about SpaceX’s mission to the International Space Station at:

Get more information about the International Space Station at: