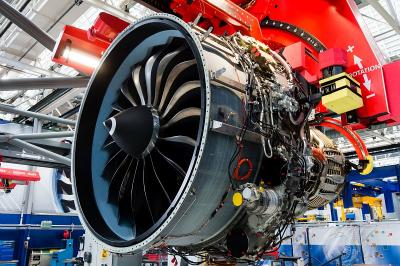 An important milestone was attained today (15.04) with delivery of the series-production integrated propulsion systems for Airbus' first A320neo Family airliner that will enter service with LEAP-1A powerplants, scheduled for delivery in mid-2016. Two Safran companies are particularly involved in this achievement: Snecma for the engine (via CFM International, a 50/50 joint company of Snecma and GE), and Aircelle for the nacelle.

The delivery was celebrated during a ceremony organized at Aircelle’s integration facility in Colomiers, near Toulouse, France. The first propulsion systems will be transferred by road to Hamburg, Germany, where they will be installed on an A320neo for delivery to the first airline that will benefit from the LEAP engines.

„Today’s delivery is exactly to the schedule established five years ago during the program’s validation, underscoring the ability of Safran and its partner GE to meet their commitments for the Airbus A320neo Family,” said Safran CEO Philippe Petitcolin. „I am particularly proud of our team, which worked diligently to achieve this on-time first delivery, and is now ready to support the fastest and the largest production ramp-up in the history of civil aviation. Today, we are ready!”

The LEAP-1A is one of three new CFM International engines that will equip the next generation of single-aisle commercial aircraft. LEAP already has more than 10,400 orders and commitments in its three versions.

Advanced technologies make the LEAP-1A an extremely reliable and fuel efficient engine for the new Airbus A320neo. LEAP offers double-digit improvements in terms of fuel consumption and CO2 emissions when compared to the latest CFM engines, along with a drastic reduction in nitrogen oxide emissions and noise. All of these technologies are added to the unmatched reliability and low maintenance costs of CFM engines.

Also playing a key role in the A320neo’s LEAP-1A propulsion system is Aircelle, which has complete responsibility for the design of the nacelle and its integration with the engine, followed by the delivery of a complete propulsion system to Airbus. The nacelles incorporate Aircelle’s best technologies, including many system innovations, the use of latest-generation composites and acoustic treatment, along with technologies that already have been proven in service – particularly on the Airbus A380.