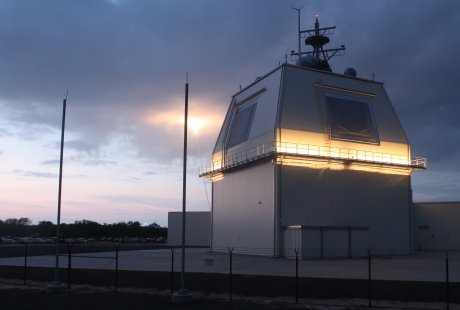 In the first live fire intercept test of Aegis Ashore, Lockheed Martin [NYSE: LMT], the U.S. Navy and the Missile Defense Agency successfully destroyed a ballistic missile target at the Pacific Missile Range Facility (PMRF).
The test also demonstrated the system’s “Launch on Remote” capability, where Aegis Ashore uses information from another radar system to launch an intercept missile before switching to Aegis Ashore’s own SPY-1 radar to guide that missile to the target. This level of interactivity between radar systems, which greatly extends the range of Aegis protection, is a hallmark of the networked, integrated shield of defense that Aegis—both at sea and on land—provides.

“This Launch on Remote capability helps broaden the reach of Aegis systems by allowing individual Aegis units to use data from networked sensors to track and engage threats,” said Brendan Scanlon, Lockheed Martin’s director of Aegis Ashore programs. “This test speaks to the flexibility of the Aegis concept, where we can network together the proven capabilities of Aegis with other missile defense systems to create a total ballistic missile defense shield.”

The PMRF Aegis Ashore facility was installed in 2013 and has passed every milestone leading up to this test. A second Aegis Ashore system is currently under construction in Deveselu Air Base in Romania, on schedule for completion by year’s end.
Aegis Ashore is powered by the latest iteration of the Aegis configuration, called Baseline 9, which also includes the most current generation of ballistic missile defense programming, BMD 5.0 CU. It is the land-based version of the Aegis Combat System, a sophisticated collection of phased-array radars, fire control directors, computers and missiles installed on U.S. Navy warships and those of its allies. As Aegis Combat Systems Engineering Agent, Lockheed Martin led the development of the Aegis Ashore weapon system for the U.S. Navy and Missile Defense Agency. Aegis Ashore is a key component of the U.S. European Phased Adaptive Approach, Phase II, a plan to protect deployed forces and our European allies from ballistic missile attack.