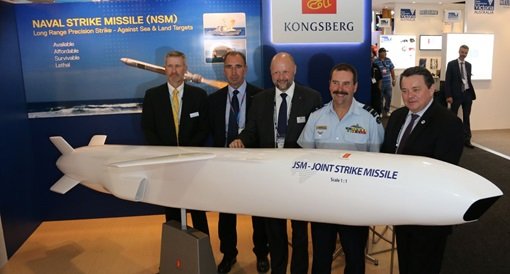 The Australian Government Department of Defence and the Norwegian Ministry of Defence today announced they will cooperate on further development of the Joint Strike Missile (JSM) developed by KONGSBERG.

Australian Minister for Defence, Mr Kevin Andrews, in a statement from the Australian Ministry of Defence said Australian cooperation on the Norwegian Joint Strike Missile, under development by Kongsberg Defence and Aerospace, would ensure the weapon capability would be available for Air Force’s future fleet of F-35A Joint Strike Fighters.

“This agreement builds on the countries’ long-standing bilateral cooperation on research and development of Defence equipment, and acknowledges the importance of a robust maritime strike capability to Norway and Australia.”

“Participating now in a cooperative JSM development program with Norway will maximise the cost effectiveness of Australia’s contribution, and ensure the weapon capability is developed and integrated onto the F-35A in the timeline required by Australia, should the Joint Strike Missile be ultimately considered for acquisition by Government later this decade.”

“Australian industry will participate in the development of the JSM by providing specialist expertise in missile guidance and control technology,” he said in the statement.

“Although far apart geographically, Norway and Australia share many of the same challenges. We are both maritime nations on the periphery of our immediate regions, with a large land mass and even larger maritime territories, yet relatively limited populations. This means that we have to maximize the effects of the capabilities that we invest in to ensure that they cover as much of the spectrum of operations as possible”, said Norwegian Minister of Defence, Ms. Ine Eriksen Søreidein the statement.

The cooperation entails a close cooperation between KONGSBERG and several Australian defence industry partners, including BAE Systems Australia and Qinetiq Australia, to develop new, innovative technology. The new technology ensures even more advanced capacities added to the JSM, including a second independent sensor within the missile to identify hostile radar targets. The new capacities will be highly relevant for both Australia and the other partner nations of the F-35-programme.

„We’re very pleased to cooperate with Australia on the JSM-program. JSM is highly sophisticated, it has unique and innovative capabilities and it is the only fifth-generation cruise missile that will be integrated on the F-35. This cooperation confirms how well JSM is positioned to meet the operational needs from partner nations”, says Walter Qvam, President and CEO of KONGSBERG.

JSM is a new missile that will enable the F-35 to fight well-defended targets across long distances, and no other weapon existing today, or under development, can perform the same types of missions. The JSM is the only long-range sea and land-target missile that can be carried internally in the F-35 and thus ensuring the aircrafts low-signature (stealth) capabilities.

JSM development was initiated in 2008 and will be a continuous activity up until the completion of a complete product in 2017. The missile is currently in phase lll of its development which will include aircraft tests, production of test missiles and integration on the F-35 Joint Strike Fighter.