Finmeccanica – AgustaWestland and Kaigai Corporation of Japan are pleased to announce that Kagoshima International Aviation has placed an order for a GrandNew light twin helicopter to perform emergency medical service missions for Hakodate City Hospital in Southern Hokkaido. The aircraft, which is expected to enter service in early 2015, will be based at the Hakodate Airport. Kagoshima International Aviation already has a GrandNew in EMS configuration in service in the Kagoshima Prefecture.

This latest purchase is part of the Doctor Heli system programme which is intended to provide modern airborne EMS coverage to all prefectures in Japan. The order further expands the presence of EMS-configured GrandNew helicopters in the Japanese market and continues the growing success of the GrandNew and Finmeccanica – AgustaWestland’s other light twin helicopters in Japan for a range of roles including EMS, law enforcement, VIP/corporate transport and electronic newsgathering.

The GrandNew was chosen by the customer after a rigorous and comprehensive evaluation process to ensure it could meet its demanding mission and safety requirements. Kagoshima International Aviation’s GrandNew features a comprehensive EMS configuration with a cabin layout able to accommodate one litter plus four medical attendants or two litters plus medical attendants. The aircraft is also fitted with skis and ice detector.

The GrandNew features the most modern developments in avionics while retaining the Grand’s outstanding performance and features. The GrandNew is the first type certified light twin (CS/JAR/FAR 27) to enter service with a new EFIS featuring Synthetic Vision and the first helicopter in this class that fully complies with the latest advanced global positioning system-based navigation requirements for all weather operations. The GrandNew offers operators unprecedented abilities to exploit the advantages of a helicopter. Orders for more than 330 helicopters from the Grand series have been placed by nearly 210 customers in almost 40 countries worldwide, to perform many tasks including EMS, SAR, electronic newsgathering, VIP/corporate transport, passenger transport, harbour pilot shuttle, maritime patrol and water pollution monitoring. 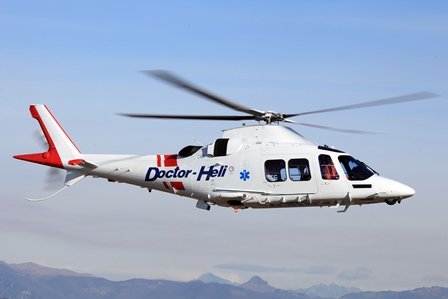