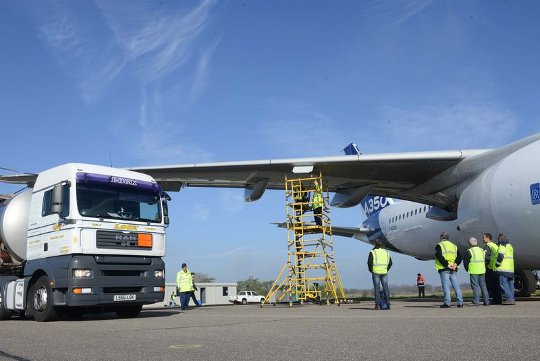 The new Airbus A350 XWB has made its first ever landing on British soil, visiting Cotswold Airport in Gloucestershire as part of routine certification tests.
The aircraft, MSN3, was flown by London-born experimental test pilot, Frank Chapman, and is one of the four A350 test aircraft currently flying and undergoing rigorous testing in preparation for the A350’s certification and entry into service later this year. In total the A350 XWB flight test campaign will accumulate around 2,500 flight hours with the fleet of five aircraft.
Captain Chapman said: “The A350 XWB has significant UK input, as the wings and fuel systems are designed at the Airbus facilities in Filton, Bristol and assembled at the company’s Broughton plant in North Wales while the engines are made by Rolls-Royce in Derby and the landing gear by Messier-Bugatti-Dowty in Gloucestershire.”
“This visit is part of the aircraft’s certification. Experts from the nearby Airbus Filton facility are playing a key role in supporting the fuel system tests.
“I’m immensely proud to be flying the first A350 XWB to land in the UK and look forward to this aircraft being a regular feature in British skies over the coming years.”
The A350 XWB is Airbus’ all-new mid-size long range product line comprising three versions. The new family whose fuselage cross-section is optimized for full long-range passenger comfort in all classes, brings a 25% step change in efficiency compared with existing aircraft in this size category. At the end of March 2014, the A350 XWB totalled 812 orders from 39 customers.