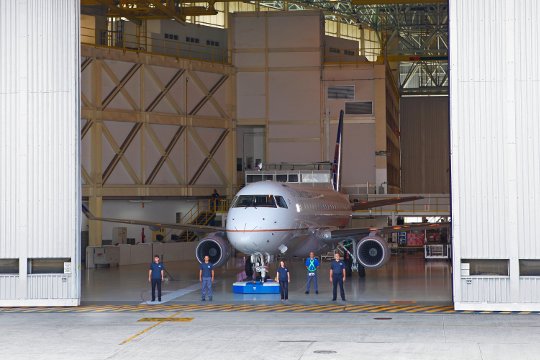 Embraer Commercial Aviation rolled out the first E175 featuring a range of aerodynamic improvements that reduce fuel burn compared to the previous production aircraft. The modifications include the introduction of a new wingtip, systems optimization, and streamlining of aerodynamic surfaces. The aircraft was presented to Embraer employees at a ceremony at the company’s São José dos Campos facility today. The first customer delivery of the E175 with the complete package of modifications is expected in the coming weeks.

The modified E175 aircraft recorded impressive results during several months of performance trials. Fuel consumption on a typical flight is 6.4% lower than the original E175, exceeding earlier-reported savings of up to 5%.

“The 6.4% fuel consumption reduction demonstrates the expertise of our development and manufacturing teams and partners, and our commitment to provide our customers with the best product to keep them competitive,” said Paulo Cesar Silva, President & CEO of Embraer Commercial Aviation. “We are delivering, on schedule, an airplane unique to the market. With the most comfortable passenger cabin in the 70 to 90-seat category, the E175 is the airplane with the lowest operating cost in its class.”

With these improvements, the E175 has become a best-seller in its category. In 2013, four airlines in the USA (Republic Airways, United Airlines, SkyWest Inc., and American Airlines Inc.) placed 177 firm orders, 60 re-confirmable orders and 277 options for the E175.

The versatility of the E175 is evident when compared with 70 to 80-passenger turboprop aircraft. On routes of more than 250 nautical miles (450 kilometers), the E175 offers better operating economics and greater productivity, as well as superior passenger comfort.

Besides reduced fuel burn, other improvements to the current generation of E-Jets include longer maintenance intervals, increased productivity and lower maintenance costs. These improvements ensure that the airplane will remain competitive until the second generation of the jet, the E175-E2, goes into operation in 2020 when it will offer even greater operating efficiency.