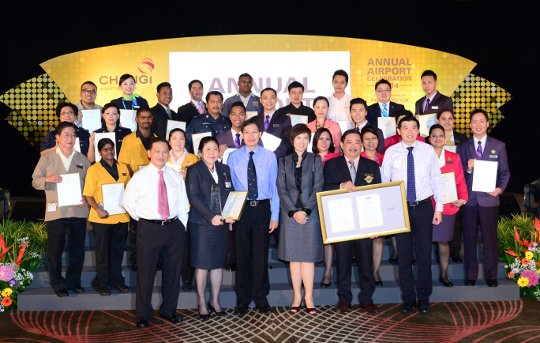 Changi Airport Group (CAG) bestowed top honours on members of the airport community for their outstanding service contributions in 2013 at its Annual Airport Celebration ceremony held at Raffles City Convention Centre today.
A total of 23 awards across five categories were presented to individuals and teams by Guest-of-Honour, Mr Lui Tuck Yew, Minister for Transport. The categories are ‘Service Personality of the Year’, ‘Outstanding Service Staff’, ‘Outstanding Service Team’, ‘Outstanding Custodial Staff’ and ‘Service Partner of the Year’, the last an award for organisations.
Mr Lee Seow Hiang, CEO of Changi Airport Group said, “Stalwarts in the airport community would remember that Changi Airport honoured its first ‘Personality of the Year’ award recipient in 1994, exactly 20 years ago. Since then, we have had the privilege of recognising an outstanding individual every year for his or her exceptional commitment to serving our passengers well. We are proud of this year’s recipient, Mdm Tan Beng Luan, who shows that helping and assisting others is very much part of her DNA.
“The aviation industry has undergone significant changes since the late 1980s; Changi Airport has also undergone several transformations. Despite increasing passenger traffic, rising to more than 53 million each year presently, the airport community continues to deliver the Changi Experience consistently. We thank the award recipients across all categories this year and also salute the tens of thousands of silent service heroes who have contributed tirelessly to making Changi Airport what it is today.”