This past summer, while researching images of the British Commonwealth Air Training Plan operations at No. 36 Service Flying Training School at Penhold, Alberta, I went to one of the greatest and least likely sources of photographic historical records – the photo/social media site known as Flickr. It is here, more often these days than “official” sources like a country’s national archives, that I have found a deep well of personal photos from veterans of the Second World War. In Flickr and other sites like it, the loving sons and daughters of airmen of the war have scanned their father’s albums and created virtual albums, sharing them with the anyone who is interested. Thanks to Flickr and its kin, vast numbers of previously unseen personal images of life in the war torn world of the early 1940s are now available.

These images help us see, feel and understand what life for the ordinary airman was like in this period. In searching for Penhold photos, I came across three albums of varying sizes. There was a huge collection of images from an Australian airman who was part of the last SFTS course at the RAF’s Penhold facility. There was another large collection of images from a young Scotsman who served as an Airspeed Oxford mechanic there in the middle of the war. And there was a small album from a Canadian airman who passed through there in 1942. Together these images show us that Penhold was a busy base, where students loved flying in the vast Alberta prairie and challenging Rockies.

Penhold, being a service Flying Training School of the RAF, operated Airspeed Oxford aircraft of the RAF, shipped over from England and assembled in Canada. The Oxford, nicknamed the 'Oxbox’, was used to prepare complete aircrews for RAF’s Bomber Command and as such could simultaneously train pilots, navigators, bomb aimers, gunners, or radio operators on the same flight. In addition to training duties, Oxfords were used in communications and anti-submarine roles and as ambulances in the Middle East. The Oxford was the preferred trainer for the Empire Air Training Scheme (EATS) and British Commonwealth Air Training Plan (BCATP) which sent thousands of potential aircrew to Canada for training.

Read the whole text and see marvelous pictures at Vintage Wings of Canada. 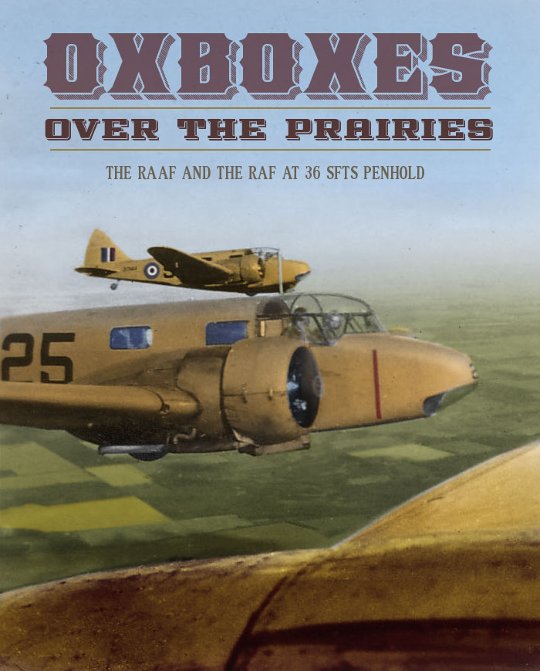