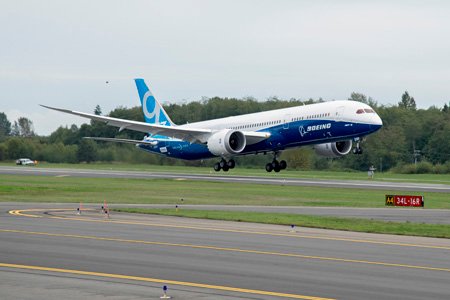 The Boeing [NYSE: BA] 787-9 Dreamliner took to the skies for the first time today, beginning a comprehensive flight-test program leading to certification and delivery in mid-2014.

With its distinctive new Boeing livery, the newest member of the efficient 787 family completed a 5-hour, 16-minute flight, taking off from Paine Field in Everett, Wash., at 11:02 a.m. local time and landing at 4:18 p.m. at Seattle’s Boeing Field.

„Today’s first flight marks a significant milestone for our team, including our partners,” said Boeing Commercial Airplanes President and Chief Executive Officer Ray Conner. „We are tremendously proud to have our customers fly the 787-9 and look forward to delivery of the first airplane to Air New Zealand next year.”

During today’s flight, 787-9 Senior Project Pilot Mike Bryan and 787 Chief Pilot Randy Neville departed to the north, reaching an altitude of 20,400 feet (6,218 meters) and an airspeed of 250 knots, or about 288 miles (463 kilometers) per hour, customary for a first flight. While Capts. Bryan and Neville tested the airplane’s systems and structures, onboard equipment transmitted real-time data to a flight-test team on the ground in Seattle.

„We accomplished a lot in this flight, and it went really well,” said Bryan. „The 787-9 is a great jet and we wanted to just keep on flying.”

Powered by two Rolls-Royce Trent 1000 engines, the first 787-9 will be joined in flight test by two additional airplanes, one of which will feature General Electric GEnx engines. Those airplanes are in the final stages of assembly in Boeing’s Everett factory. Over the coming months, the fleet will be subjected to a variety of tests and conditions to demonstrate the safety and reliability of the airplane’s design.

The 787-9 will complement and extend the 787 family, offering airlines the ability to grow routes first opened with the 787-8. With the fuselage stretched by 20 feet (6 meters) over the 787-8, the 787-9 will carry 40 more passengers an additional 300 nautical miles (555 kilometers), with the same exceptional environmental performance — 20 percent less fuel use and 20 percent fewer emissions than similarly sized airplanes. The 787-9 leverages the visionary design of the 787-8, offering the features passengers prefer such as large, dimmable windows, large stow bins, modern LED lighting, higher humidity, a lower cabin altitude, cleaner air and a smoother ride.

Boeing is on track to deliver the 787-9 to launch customer Air New Zealand in mid-2014. Twenty-five customers from around the world have ordered 388 787-9s, accounting for 40 percent of all 787 orders.