Eurocopter today delivered the first NH90 NFH (NATO Frigate Helicopter) to the Belgium Armed Forces, providing an advanced, highly capable and fully-qualified rotary-wing aircraft for this nation’s multi-role mission requirements. In addition to being the no. 1 NH90 NFH received by Belgium, it also is the first built at Eurocopter’s Donauwörth, Germany industrial site – demonstrating this facility’s capability to assemble and deliver these new-generation twin-engine helicopters. Belgium will become the fifth country to put the European-developed NH90 NFH version into service, joining France, Italy, the Netherlands and Norway. The aircraft delivered today is rated at Full Operational Capability (FOC), ensuring its aptitude for the full range of Belgium naval missions – such as Search and Rescue (SAR) or military missions at sea. Training of Belgium Navy flight and maintenance crews on the NH90 NFH will begin next month, with operations to be initiated in 2014 using its first two helicopters. Belgium has ordered eight NH90s in total, including four of NFH naval versions. The NH90 NFH is replacing the Belgium Navy’s Sea King helicopters. Its configuration is identical to the Dutch NH90 NFH version. “The NH90 NFH is operationally proven, and Belgium will benefit from this helicopter’s already validated performance, reliability and versatility,” said Michel Polychroniadis, Director of the NH90 Programme at Eurocopter. “The Belgium acceptance teams and flight crews have been impressed by the NH90 NFH’s flight stability and its capabilities, providing a preview of the operational enhancements that will be provided for the country’s army.”
Military services currently operating the NH90 NFH have successfully utilized the helicopters in rescue, transport and surveillance missions. As an example, more than 50 persons have been rescued to date by French Navy NH90 NFH rotorcraft, while the Netherlands recently deployed its NATO Frigate Helicopters to the Horn of Africa in support of the European Union’s Atalanta naval operation. The NH90 is the most successful helicopter program in Europe, boasting 529 firm orders from 14 different countries. A total of 154 NH90s has been delivered. The NH90 NFH version alone has accumulated 111 bookings. Management of the NH90 program is handled by the NHIndustries consortium, which is owned by Eurocopter (62.5%), AgustaWestland (32%), and Stork Fokker (5.5%). 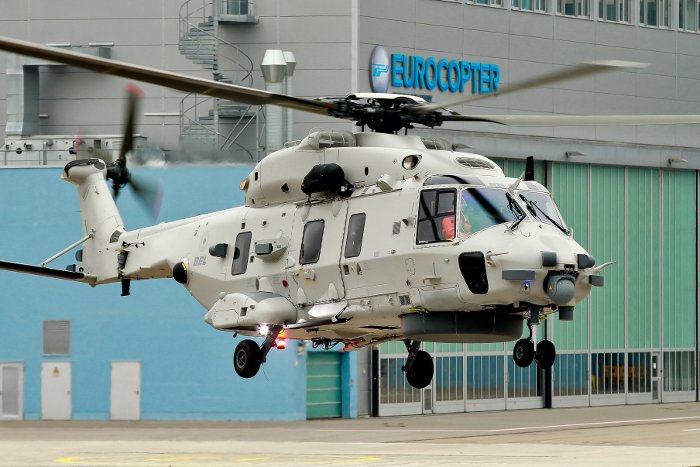