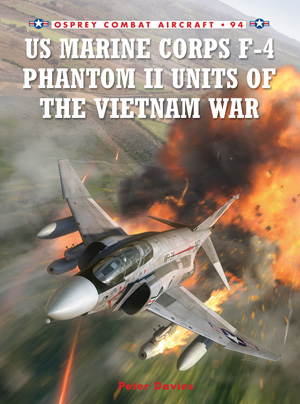 The reviewed book is a part of a  well-known series in the portfolio of Osprey Publishing – Osprey Combat Aircraft. This is the 94  book in this series. The author of the publication is Peter E. Davies, who wrote 22 books in his career. His interests focus on aviation during the Cold War and the Vietnam War. The book is published in a slightly enlarged A4 format, and on a high quality paper and counts 96 pages including attachments.

The reviewed book describes the participation of eleven squadrons from U.S. Marine Corps equipped with F-4 Phantom II aircraft, which took part in the Vietnam War in 1965-1973. The author describes the operations of these units, which mainly led air strikes to support U.S Army, through attacks on enemy troops carried out from very low altitude. Phantoms were used to implement the doctrine of close air support, which at that time was preferred by the U.S. Marine Corps. Author cites dozens of Phantom crews memories, includes hundreds of photos of F-4 Phantom II and describes in detail the weapons used by the Americans, such as napalm, bomb Snakey (Mark 81) and Zuni rockets. From pilots account emerges an image of the Vietnam War itself, its characteristics and cruelty, as well as the characteristics of the F-4 Phantom II, which is from obvious reasons very important in this book. This machine was a workhorse of the U.S. Marine Corps, as well as the U.S. Air Force during the Vietnam War, and the pilots liked it very much.  This heavy fighter-bomber was capable of operating in all weather conditions.

Davies book is divided into 5 chapters and annexes at the end of the book. Inside there are thirty colorful plates with the F-4 Phantom II used by the U.S. Marine Corps squadron by Jim Laurier. The chapters are arranged in a chronological manner. In the  annexes the author posted a list of all squadrons operating on the Phantoms, with their stations and their own losses. At the end of the book there is a helpful index.

The book is pleasant to read and the reader will learn  a lot from it about air operations during the Vietnam War, especially the mission of CAS – Close Air Support, which were the specialty of U.S. Marine Corps Phantom II crews. This is undoubtedly a popular science book, addressed to a wide range of readers, and therefore it lacks  footnotes and bibliography. What increases the value of this book are the accounts of American pilots, which makes it interesting to anyone dealing with the issue of the Vietnam War aviation.

The book was made available for review courtesy of Osprey Publishing.