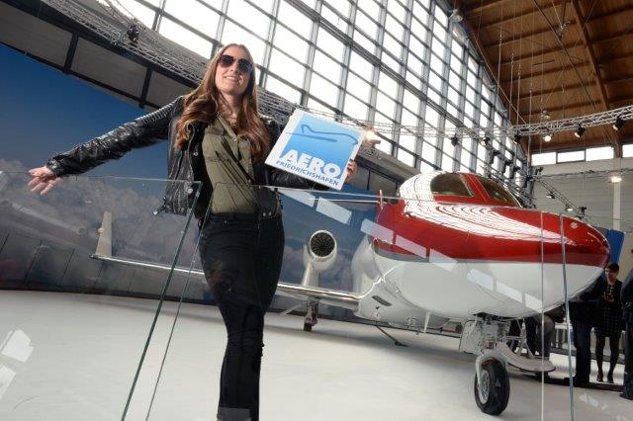 One day before the opening of the international aviation exhibition the AERO, many new and innovative aircraft were at the center of attention during a press tour. New electric aircraft, ultralight helicopters and sleek business jets were shown, as were many other aircraft that will be at the center of the exhibition. A total of 606 exhibitors are represented at the AERO in Friedrichshafen, which is open through Saturday April 23. General aviation aircraft are the subject of the exhibition, a category that includes all civilian aircraft, helicopters, gliders and ultralight aircraft that are not involved in commercial passenger or charter operations.
At the AERO, ultralights represent one focus area within general aviation. These are single and two-seat propeller aircraft that may not exceed a weight of 472 kilograms and that are quiet as well as fuel efficient. Bücker and Funk, a company based in Speyer, Germany, is presenting a new aircraft in this class. Their two-seat high wing model, the FK 139 Clubmann, is driven by a 130 horsepower radial engine and features a retro design. But other than nostalgic look might suggest, this ultralight is equipped with a modern parachute rescue system that the pilot can activate in an emergency situation or in case of a collision. The entire aircraft then slowly descends, suspended from the parachute.
The development of electric aircraft also continues to pick up speed, something that is clearly visible at the AERO 2016. In Friedrichshafen, Siemens AG, in cooperation with the Slovenian manufacturer Pipistrel and two universities, will present the Hypstair, a hybrid propulsion system for smaller propeller-driven aircraft. At its core is a new kind of Siemens electric motor.
Another unusual project is a cooperative effort between Siemens AG and Extra Flugzeugproduktions GmbH, a company based in North-Rhine Westphalia, to test an electrically powered Extra 330 aerobatics airplane. For the first time, a Siemens electric engine is being installed in this two-seat high performance aircraft.

Page 1The Coax 2d is a new kind of helicopter from Thuringia’s edm-aerotec and my soon receive regulatory approval to operate as the first ultralight helicopter. The introduction of this new class of aircraft may be allowed in Germany as soon as 2016 or 2017.
Rheinland Air Service, the German distribution partner for Honda Deutschland’s business jets, is presenting a new twin-engine jet at the AERO. The Honda, which has room for four to six passengers, distinguishes itself from other light business jets thanks to the fact that its engines are on top of the wing rather than below it or on the rear of the fuselage, as is common with other business jets. The unusual placement of the two nacelles above the wing is intended to reduce noise for the passengers
and to enable more efficient fuel consumption at higher speeds. The Honda jet hasbeen approved for flight operations since the end of 2015, and the first serial production aircraft have already been delivered to customers. The Quest Kodiak is another business aircraft that is intended only for use as a utility vehicle. This robust plane can land on grass, gravel and bush runways and is driven by a strong 750 horsepower turboprop engine.
The AERO 2016 begins on Wednesday, April 20 and lasts until Saturday, April 23, 2016. More information is available at www.aero-expo.com.