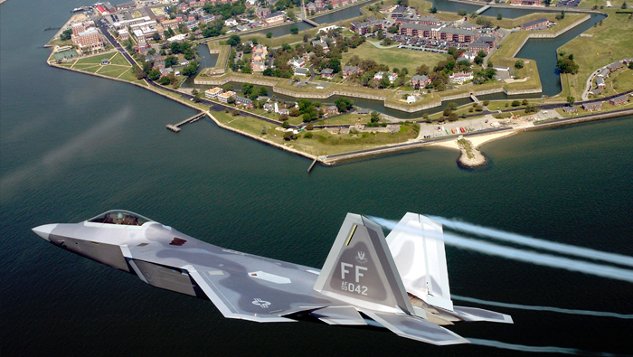 The F-22 Raptor, a military fighter jet with a history of adapting to changing mission needs, passed a significant milestone this past December with its 10-year anniversary of Initial Operational Capability (IOC) with the U.S. Air Force. Two Pratt & Whitney F119-PW-100 turbofan engines power the F-22, and the F119 is the world’s first operational fifth-generation engine in service.

The F-22 is an aircraft known for its unparalleled maneuverability and its ability to „supercruise,” or operate supersonically without afterburning. The F119 engine that powers it is considered one of the Air Force’s most successful power plants. Reaching the IOC milestone culminated a collaborative effort between various Air Force organizations and the service’s industry partners over 25 years.

Unprecedented ease of assembly, maintenance and repair were designed into the F119 from its inception, using a balanced team approach that included assemblers and flight-line mechanics.

John Hill, F119 site manager at Nellis Air Force Base in Nevada since 2005 and a 37-year employee, knows the F119 engine quite well. Hill began working on the predecessor YF119 program in 1990, when he transferred from being an F100 field service representative in Arizona to Edwards Air Force Base in California. He’s followed the development and operation of the program ever since.

„I didn’t realize we passed the milestone,” Hill said. „That’s probably because we have all been hard at work to mature the engine and support system, ensuring this program reaches its full potential.” From a field standpoint, the F119 is the most maintainable and robust military jet engine ever designed. It came with an Air Force expectation that we would not do scheduled inspections on-wing and that the engine had to withstand significant foreign object damage. Pilots and the maintenance teams love it.”

„The F-22 was born out of the end of the Cold War to replace the F-15 and address a 'mission deficiency' that would guarantee air superiority and having a better fighter than anyone else,” said Ron Fritsch, chief engineer, F119/F100/Operational Military Engines (OME), who has served on the F119 program, on and off, for more than 25 years. „The aircraft and its F119 engines met that need for air dominance.”

Over the years, the mission changed, and the F-22—somewhat remarkably—adapted to its new tasks. „We always knew it was a great aircraft, but the things they’re doing now in Middle East combat are not what it was designed for,” Fritsch added. „It has the ability to not only direct munitions where they need to go but also process information, identify hazards and play a quarterbacking, air-traffic-control role.

„To me, there’s so much pride in the aircraft and the engine,” Fritsch said. „The F119 was a large step forward, a new generation of engine. We hear constantly how important our engine is to the pilots and their missions and how great the performance is. It makes us appreciate the engine’s role in completing the mission and getting home safely.”

Linda O’Flarity, CIPT leader – OME Control and Diagnostics Systems, who’s also been involved with the F119 engine since the YF competition, is responsible for the computer portion of the engine and test support equipment used in Lockheed’s integrated maintenance system. She echoed the sentiment of pride surrounding the program.

„Beyond the IOC milestone, there’s been a lot of pride in the F119 all along,” she said. „There is nothing like this engine. It’s the first of its kind, from many perspectives. The learnings we’ve been able to pass on to subsequent engine programs have been substantial.”

„It’s somewhat ironic in some ways that, even though the aircraft entered into service in 2005, it didn’t have its first combat mission until 2014,” Fritsch added. „We’re finally hearing about how they’re doing in combat and how effective the aircraft is. „Knowing the capability of the engine was the biggest frustration over the years as we waited for it to enter into its combat role. We heard that the future of war doesn’t require the aircraft – and we’ve found that’s just not true.”