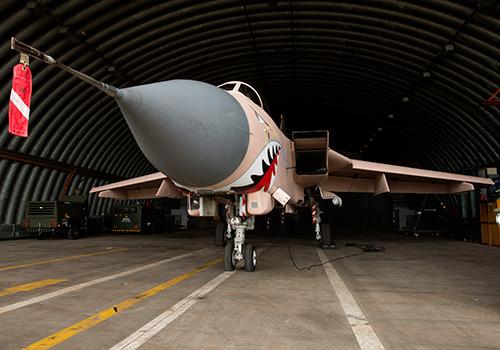 Twenty-five years since the Royal Air Force helped liberate Kuwait from Saddam Hussein’s forces, an RAF Tornado GR4 has been painted in the iconic Gulf War ‘desert pink’ paint scheme to honour the aircraft type’s almost continuous operational service since then. On 28 February – the 25th anniversary of Saddam’s forces’ withdrawal from Kuwait – the aircraft is planned to stage a flypast at the National Arboretum at an event honouring the British forces involved in the Gulf War.

The ‘desert pink’ Tornado, number ZG750, is based at RAF Lossiemouth with XV(R) Squadron, which saw active service during Operation Granby, the UK’s codename for the Gulf War. The aircraft carries 11 ‘battle honours’ on its tail, recalling the Tornado’s almost continuous service on operations worldwide since 1991.

Air Marshal Sir Stephen Hillier, Chief of the Air Staff (Designate) said: “Having flown the Tornado on operations, it is wonderful to see this aircraft in a paint scheme marking 25 years of almost constant deployed operations for the Tornado Force. It has consistently been at the forefront of the RAF’s attack capability and continues to make an enormous contribution today on operations in the Middle East against Daesh, operating alongside Typhoon, and will continue to do so until its planned exit from Service. I look forward to my time as the next Chief of the Air Staff, when I will oversee the introduction into operational service of the Tornado’s replacement, the F-35B Lightning II.”

Tornado F3 fighters and GR1 bombers – from which today’s Tornado GR4 descends – were among the earliest allied aircraft to launch operations against Saddam’s forces in Kuwait from January 1991. Tornado GR aircraft have seen active service on operations worldwide every year since then, including in humanitarian, reconnaissance and strike roles. Recent deployments include Libya, Nigeria and Afghanistan, and Tornado GR4s are currently flying in Iraq and Syria as part of a global coalition to help defeat the Daesh terrorist group.

Air Vice-Marshal Gary Waterfall, who is responsible for RAF strike aircraft as Air Officer Commanding 1 Group RAF, said: “The Royal Air Force can look back at Tornado’s service on Operation GRANBY with great pride. In the 25 years since the Gulf War, Tornado has proven itself again and again to be a formidable strike aircraft with an enviable operational record; today it continues to serve the nation in the fight against Daesh. I’m humbled by the courage and hard work of every man and woman involved in maintaining and flying this incredible machine.”

The Tornado was introduced into RAF service in 1979, and has been updated throughout its life to keep up with the changing requirements of the modern battlefield. Today’s Tornado GR4s carry improved precision guided weapons including the Paveway IV laser- or GPS-guided bomb and Brimstone missiles, as well as cutting-edge RAPTOR and Litening III surveillance and targeting pods.