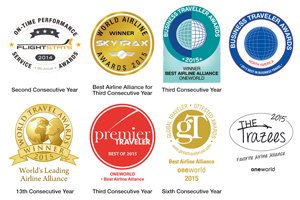 oneworld® has won its fourth best airline alliance award in two weeks – and its eighth of the year, confirming its position as the world’s most highly prized airline alliance.

It makes oneworld the holder of twice as many best airline alliance awards than its competitor alliances combined.

The latest honour comes from World Travel Awards, which named oneworld the World’s Leading Airline Alliance 2015 at a gala ceremony in Morocco on Saturday.  It is the 13th year running that oneworld has received this award.

These four trophies now sit on its mantelshelf alongside four others received by oneworld earlier this year:

oneworld also holds both awards available to airline alliances for the quality of the wines served by its member airlines in-flight – Business Traveller’s Cellars in the Sky Award 2015 and Global Traveler’s Best Alliance Wines on the Wing Award 2015.

oneworld CEO Bruce Ashby said: “oneworld aims to be the first choice alliance for frequent international travellers the world over, with quality one of our core values, so we very much appreciate being judged best in these surveys of international air travellers and travel specialists.  We will continue to strive to live up to these honours.”