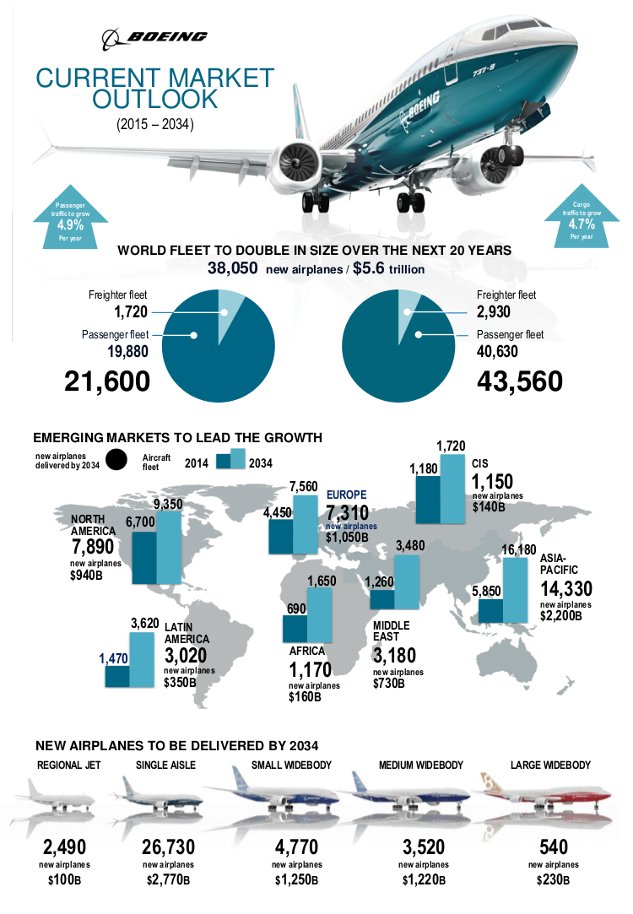 Boeing [NYSE: BA] projects a demand for 38,050 new airplanes over the next 20 years, an increase of 3.5 percent from last year’s forecast. Boeing released its annual Current Market Outlook (CMO) today, estimating the total value of those new airplanes at $5.6 trillion.

„The commercial airplane market continues to be strong and resilient,” said Randy Tinseth, vice president of Marketing, Boeing Commercial Airplanes. „As we look forward, we expect the market to continue to grow and the demand for new aircraft to be robust.”

By the end of the forecast period, the commercial airplane fleet will double, from 21,600 airplanes in 2014 to 43,560 airplanes in 2034. Fifty-eight percent of the 38,050 airplanes delivered over that time will be to accommodate growth.

Passenger traffic will continue to grow at about a 4.9 percent annual pace, near the historic trend line of 5 percent. More than 7 billion passengers will fly by the end of the forecast period. Cargo traffic will grow at about 4.7 percent per year.

The single-aisle market continues to be the fastest-growing, largest overall segment, requiring 26,730 airplanes over the coming two decades. These aircraft are the foundation of the world’s airline fleet, carrying up to 75 percent of passengers on more than 70 percent of the world’s commercial aviation routes. This sector is fueled by growth in low-cost carriers and airlines in developing and emerging markets.

„At the heart of the single-aisle market are the Boeing 737-800 and the future 737 MAX 8,” said Tinseth. „These airplanes offer customers the most fuel efficiency, reliability and capability in this class.”

About 35 percent of the single-aisle market will go to low-cost carriers, Tinseth noted. „Low-cost carriers will require airplanes that combine the best economics with the most revenue potential. With 20 percent lower fuel use, the 737 MAX 200 will be the ideal machine for them.”

Boeing forecasts that the widebody segment will require 8,830 new airplanes, led by small widebody airplanes in the 200- to 300-seat range such as the 787-8 and 787-9 Dreamliner. This year’s forecast reflects a continued shift in demand from very large airplanes to efficient new twin-engine products such as the 787 and new 777X.

„The 737 MAX, 777 and 787 are perfectly positioned to capture this important wave of replacement,” Tinseth said.

The air cargo market continues to strengthen, and will drive demand of some 920 new airplanes over the 20-year forecast.

„We’ve seen two years of solid growth in the air cargo market and we expect that growth to continue,” Tinseth said. „That’s great news for our line of production freighters, including the 747-8, 767 and 777.”

Boeing’s Current Market Outlook is the longest running jet forecast and regarded as the most comprehensive analysis of the aviation industry. The full report can be found at www.boeing.com/cmo.

The Asia market, including China, will continue to lead the way in total airplane deliveries over the next two decades.