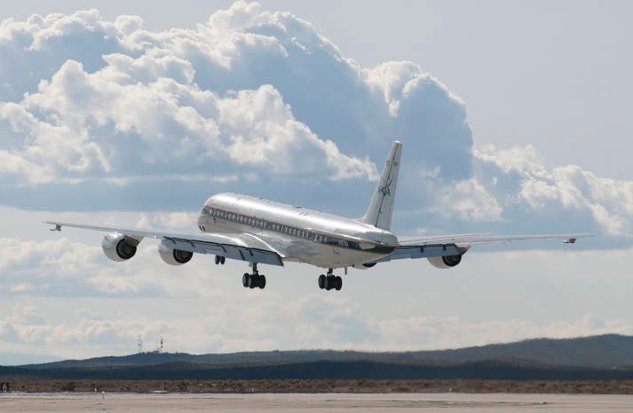 NASA’s DC-8 aircraft began a series of science flights based out of Keflavik, Iceland, on May 11 aimed at studying Arctic polar winds.

The mission goals are to provide current wind data to preexisting weather models and to collect pre-launch calibration and validation data in support of the European Space Agency’s (ESA) Atmospheric Dynamics Mission Aeolus satellite, or ADM-Aeolus.

The ADM-Aeolus satellite, ready for launch in 2016, will be the first of its kind to measure key elements in the Earth’s wind fields. Using Doppler wind lidar, the ESA satellite will observe profiles of wind, aerosols and clouds along its orbital path. These measurements will allow scientists to build complex models of Earth’s weather and climate patterns.

This airborne mission is primarily focused on gathering wind data in the Arctic polar regions near Iceland and Greenland. This area is of particular interest to both NASA and ESA due to the continued rise in arctic temperatures and decrease in polar ice formation.

“The polar winds mission demonstrates the contribution of airborne Doppler wind lidars in improving our understanding of energy and atmospheric chemistry transport around the polar regions. Research from this mission will ultimately contribute to improved modeling and study of climate change,” said Dr. Dave Emmitt of Simpson Weather Associates, Charlottesville, Virginia and lead scientist for the mission.

These lidar instruments are supplemented with a dropsonde system, consisting of approximately 100 small tube-shaped instruments that will be dispensed from the aircraft inflight. The dropsondes are used to obtain vertical wind profiles to validate the lidar system data sets. The dropsondes also contain sensors that transmit and record information on air temperature and moisture.

The DC-8 is based at NASA’s Armstrong Flight Research Center facility in Palmdale, California, and supports NASA’s Airborne Science Program under the Science Mission Directorate. The extended range, prolonged flight-duration capability, large payload capacity, and laboratory environment of the DC-8 make it one of the premier research aircraft available to NASA’s Science Mission Directorate.

NASA researchers collect and study data from space, air, land and sea to tackle challenges facing the world today, including improved environmental prediction and natural hazard and climate change preparedness. NASA develops new ways to observe and study Earth’s interconnected natural systems with long-term data records. The agency freely shares this unique knowledge and works with institutions around the world to gain new insights into how our planet is changing.