GE Aviation shipped its 2000th GE90 engine to Boeing for the 777 aircraft, a significant milestone in this influential engine program.

“The GE90 engine along with the Boeing 777 aircraft helped revolutionize the twin-engine aircraft concept in commercial aviation,” said Bill Millhaem, general manager of the GE90/GE9X Program at GE Aviation. “Prior to its introduction, twin-engine aircraft were not viewed as a viable option for long-haul travel. Yet the proven performance and reliability of the GE90-powered Boeing 777 aircraft altered this mindset and made the engine-aircraft combination among the most successful long-range, wide body offering in service today.”

Close to 70 operators utilize GE90-powered Boeing 777 aircraft, with the 2000th engine powering a Boeing 777-300ER aircraft. More than 500 GE90 engines are on the order book, which continues to increase.

The GE90 engine family powers the Boeing all 777 models and is the exclusive powerplant on the 777-300ER, -200LR, and Freighter aircraft. Of the 2000 GE90 engine delivered to date, more than 400 were the earlier GE90-94B model and almost 1600 were the GE90-115B engine, which is the world’s most powerful jet engine. The family has accumulated more than 45 million flight hours and 7 million cycles since entering service in 1995.

The GE90 engine provides the foundation for the new GE9X engine that will power the Boeing 777X aircraft. The GE9X engine will be in the 100,000 pound thrust class and features a 133-inch diameter composite fan case and 16 composite fan blades; a next-generation 27:1 pressure-ratio 11-stage high-pressure compressor; a third-generation TAPS III combustor for high efficiency and low emissions; and CMC material in the combustor and turbine. Almost 700 GE9X engines have been ordered by customers since it was launched last year. Technology maturation testing on key components for the GE9X will continue next year with the first engine scheduled to test in 2016. 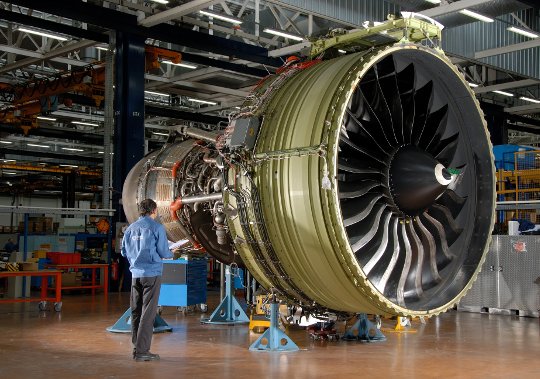