Russian Helicopters (part of State Corporation Rostec) has launched flight tests on the first prototype of the multirole Mi-171A2 helicopter. During its first flight its main systems were tested and found to be in excellent working order, according to commander and test pilot 1st class Salavat Sadriev.

The first prototype of the Mi-171A2 was designed for tests on its in-flight operability and safety when using the KBO-17 avionics suite, including its interoperability with the new VK-2500PS-03 engines, and to test the new powerplant. The first Mi-171A2 prototype has been subjected to ground runs, which passed off smoothly and led to the first successful tests in hover mode in October 2014. The new helicopter’s rotor system and engine were tested by the special 'flying laboratory’ – Mi-171LL.

The KBO-17 avionics suite is built by Radioelectronic Technologies to a 'glass cockpit’ design, and includes all-weather digital TV and thermal imaging cameras, delivering external visibility day or night, with the video output given on a high-resolution multifunction display. The high degree of automation has made it possible to cut crew numbers from three to two people. The on-board maintenance systems built in to the KBO-17 make it possible to monitor the condition of the helicopter’s main systems and components, storing this data in its memory.

The first round of tests on the 'flying laboratory’ delivered a 20% increase in cruising and maximum speeds, increased main rotor thrust (by more than 800 kilograms), reduced vibration from the standard vibration dampener. The maximum speed was confirmed as being 280 km/hour.

A range of alterations in construction, including new main and tail rotors, smoother vertical and horizontal fins, will be incorporated into the second prototype of the Mi-171A2. The second test prototype will be equipped with an additional range of equipment options: an external sling for up to 5 tonnes and weight measurement system; air-conditioning system, energy absorbing passenger seats for 24 people, and anti-dust equipment that cleans air to 97%. This model is currently being assembled and equipped at the Mil Moscow Helicopter Plant.

The Mi-171A2 was developed by Mil Moscow Helicopter Plant, part of Russian Helicopters. Many of the solutions developed during design work on the Mi-171A2 have been incorporated into other helicopters in the Mi-8/17 family, which has long helped ensure they meet the latest international standards.

The Mi-171A2 is one of the most eagerly awaited developments in Russian helicopter building. The helicopter represents the future of the world-famous Mi-8/17 helicopter, with significant changes to its design and on-board equipment that improve its flight capabilities and reduce operational costs. The main differences between the Mi-171A2 and previous models are:

The Mi-171A2 can be operated at any time of day or night, including in difficult weather conditions, can work in hover mode and with automatic stabilisation, and can also fly on special trajectories. 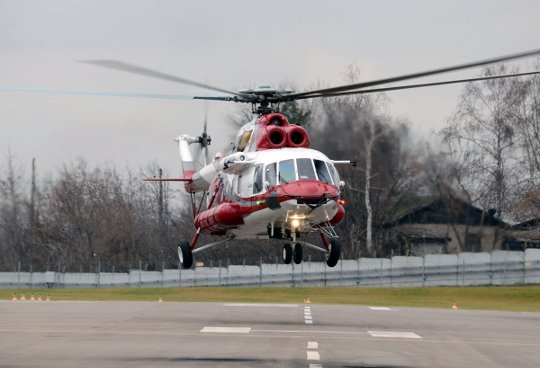