Russian Helicopters (part of State Corporation Rostec) has completed modernisation work on Mi-8AMTSh-V helicopters, for delivery to the Russian Air Force under the State Defence Order, which are produced by Ulan-Ude Aviation Plant incorporating the focus on import substitution. The latest Mi-8AMTSh-V has been praised by military pilots of the Mi-8AMTSh (export name Mi-171Sh).

„We understand the importance of being as independent as possible from foreign-made components and units in the machines we deliver under the State Defence Order, and are focusing on this area of activity,” said Russian Helicopters CEO Alexander Mikheev. „Further, the results of this work on the Mi-8AMTSh-V testify to the fact that using Russian-made equipment allows us to significantly improve the helicopter’s flight capabilities.”

In order to reduce dependence on foreign suppliers, all Mi-8AMTSh-V helicopters are fitted with the latest Russian-made equipment. The helicopter boasts more powerful VK-2500-03 engines produced by Klimov (part of United Engine Corporation). The VK-2500-03 engines boast improved capacity, enabling them to noticeably improve reliability and safety during combat use, and improving their overall flight capabilities. In addition, the Russian engines’ increased power positively impacts the helicopter’s operational costs.

The helicopter is also fitted with a Russian-made on-board satellite navigation suite that is compatible with Russia’s GLONASS and GPS. The latest communications systems – also Russian-made – ensure the helicopter crew enjoy quality connections over a wide range of frequencies.

For the crew’s in-flight comfort and safety, the helicopter boasts the latest Russian weather radar systems offering a 3D image of weather formations and objects. Information from the weather radar and navigation equipment is displayed on a large digital multifunction display, for improved flight safety and added convenience.

For improved combat resilience, the helicopter is equipped with the latest Russian-made ceramo-metallic armour, boasting greater resilience and weighing less than steel armour.

Ulan-Ude Aviation Plant, is a Russian Helicopters company. In the 70 years of its existence, it has produced over 8,000 units. Today the plant specialises in producing the Mi-8AMT (Mi-171 – export variant) multirole helicopter and the Mi-8AMTSh (Mi-171Sh – export variant), and is also involved in developing and preparing for series production on the latest Mi-171A2 medium helicopter. 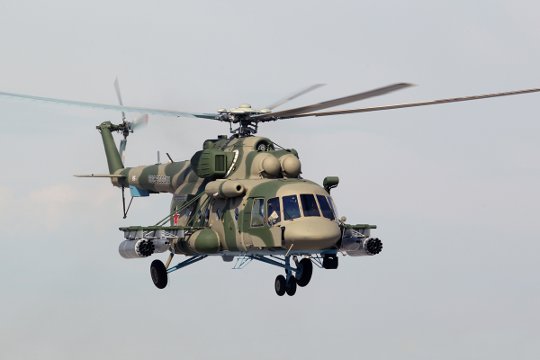