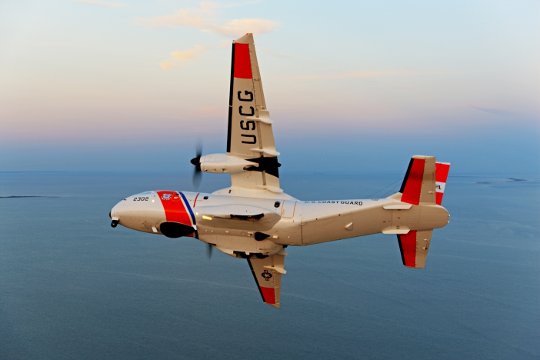 The demonstrated maintainability of the HC-144A aircraft allows the Coast Guard to fly more hours per airframe in a year with the Ocean Sentry than any other aircraft in its fleet.

“The combination of low operating costs and ease of maintenance will continue to enable the HC-144A to achieve exceptionally high flying hours,” said Allan McArtor Airbus Group Inc. Chairman and CEO. “We look forward to supporting it in service for many years to come.”

The fleet delivered by Airbus Defense and Space, Inc. has successfully undertaken a wide variety of maritime patrol missions from bases at Cape Cod, Mass., Mobile, Ala., and Miami. The Coast Guard will take delivery of the 18th aircraft this year and is planning to base three aircraft at the fourth HC-144A air station in Corpus Christi, Texas.

The HC-144A Ocean Sentry is based on the proven Airbus CN235 tactical airlifter and maritime patrol aircraft built by Airbus Defense and Space, of which more than 235 are currently in operation by 29 countries. The HC-144A was selected by the US Department of Homeland Security as its 2013 DHS Project of the Year, recognizing the program’s record of on-time and on-budget achievement.

In its first 50,000 hours in operation the HC-144A has reliably performed a broad range of missions including search and rescue, homeland security, disaster response and national defense, and it has been a key tool for the Coast Guard at critical moments including the Haiti earthquake, Deepwater Horizon disaster and Hurricane Sandy.