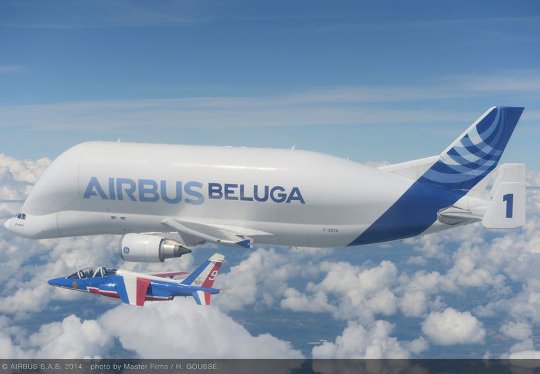 Conducted 30 May during the long holiday weekend in France, this historic event was photographed and filmed – with the resulting material to be used to mark the Beluga’s upcoming 20th anniversary in September.
The Beluga and Patrouille de France aircraft were in town for the Airexpo air show held in nearby Muret, France. Because they cannot fly together at air shows for security reasons, both teams agreed to perform the milestone formation flight the day before Airexpo’s opening.
“Since there are many Beluga pilots who are former military airmen, we have a special relationship with our colleagues who are still serving today,” said Didier Gros, head of Beluga’s flight crews.
“Not only that, but we also share the pride and honour of flying iconic aircraft,” added François Cantin, head of Beluga’s flight operations. “When we learned that we would all be at the Muret air show, we knew that this was an opportunity that we could not miss.”
The Beluga – which is managed by Airbus subsidiary ATI – has a fleet of five aircraft that plays a vital role in ensuring the ramp-up of several Airbus programmes.
Founded in 1931, Patrouille de France is the French Air Force’s precision aerobatic demonstration team, flying Dassault-Breguet/Dornier Alpha Jets.