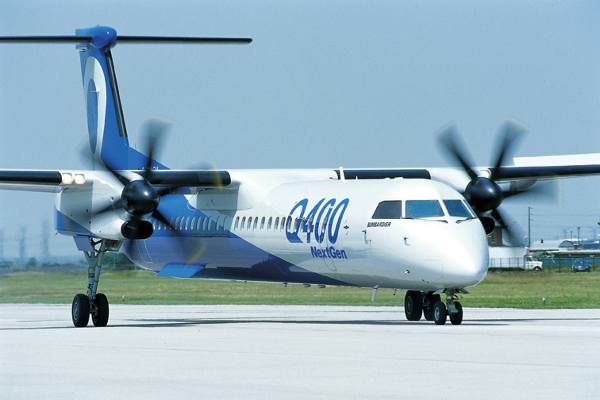 Bombardier Aerospace announced today that a customer in the Middle East and Africa region, who has requested to remain unidentified at this time, placed a firm order for two Q400 NextGen turboprop airliners.

Based on the list price of the Q400 NextGen airliner, the order is valued at approximately $62 million US.

„We are delighted that operators in the Middle East and Africa region are showing such strong confidence in the Q400 NextGen aircraft as they continue to recognize the advantages offered by its operational flexibility,” said Ray Jones, Senior Vice President, Sales, Marketing and Asset Management, Bombardier Commercial Aircraft. „That flexibility has increased even further with the now available extra capacity seating configuration, which offers up to 86 seats and boasts up to a 17 per cent seat-cost advantage for operators compared to its closest turboprop competitor.”

The fleet of Bombardier commercial aircraft in the Middle East and Africa is steadily growing with more than 200 Q-Series turboprops, CRJ regional jets and CSeries airliners now in service with, or on firm order from, approximately 50 customers and operators in the region. Bombardier’s Commercial Aircraft Market Forecast for the period 2013-2032, covering aircraft from 20 to 149 seats, predicts deliveries of 480 units to the Middle East and 700 to Africa over the forecast period.

Operating from the company’s regional office located in the United Arab Emirates, Bombardier Commercial Aircraft’s sales and marketing team is well positioned to provide industry-leading solutions to its current and prospective customers. The company’s customer support network for commercial aircraft in the Middle East and Africa includes a parts depot in Dubai; a Regional Support Office (RSO) and parts depot, co-located in Johannesburg, South Africa; as well as Authorized Service Facilities in South Africa and Ethiopia.