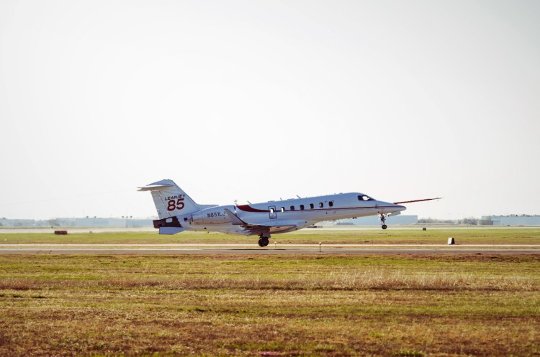 During its maiden flight which lasted approximately 2 hours and 15 minutes, the Learjet 85 aircraft reached an altitude of 30,000 feet (9,144 metres) and an air speed of 250 knots (463 km/h; 287 mph). All flight controls were exercised with the systems and aircraft performing as expected.

“The first flight of the Learjet 85 aircraft was a very proud and thrilling moment for all Bombardier employees,” said Éric Martel, President, Bombardier Business Aircraft. “Incredible hard work and dedication from our people went into this aircraft development program. This includes our sites in Wichita, Querétaro and Montréal, as well as our facility in Belfast, Northern Ireland. We are all very excited to see this new aircraft, the fastest and most spacious Learjet aircraft, take to the skies, and we look forward to a very successful flight test program.”

Bombardier employees along with suppliers were on hand at the Bombardier Wichita facility to celebrate this milestone flight and greet the Learjet 85 aircraft and test flight crew upon landing.

“Today marks a significant accomplishment for the Learjet 85 team. The aircraft performed very well. I would like to congratulate all the employees who have played a role in achieving FTV1’s maiden flight,” added Ralph Acs, Vice President and General Manager, Learjet 85 program.

The new Learjet 85 aircraft – Redefining the midsize segment
With a customer-driven clean-sheet design, the Learjet 85 aircraft will be the largest, fastest and most capable Learjet aircraft ever. True to its legendary heritage, the Learjet 85 aircraft is set to deliver the extraordinary performance, superior technology and exceptional value Learjet aircraft owners expect. The jet is powered by two Pratt & Whitney Canada PW307B engines, each boasting 6,100 pounds of take-off thrust at sea level up to 86ºF (30ºC) and low noise levels, while the advanced low NOx emitting combustor offers reduced environmental impact. The aircraft targets a high-speed cruise of Mach 0.82 and a transcontinental range of approximately 3,000 nautical miles (5,556 km)*.

The Learjet 85 aircraft flight deck combines advanced technology, with superior design elements for a cockpit environment unlike any other midsize jet. The latest in technological advancements and superior design aesthetics from the Bombardier Vision flight deck offer pilots the most sophisticated cockpit in its class.

The aircraft’s Cabin Management System will feature a high-capacity Ethernet network, a digital amplifier to feed the high-fidelity speaker system and an interface to support the aircraft cabin environment, including lighting and temperature control. The system’s open architecture also allows for easy integration of third-party equipment and new applications, such as high-definition features.