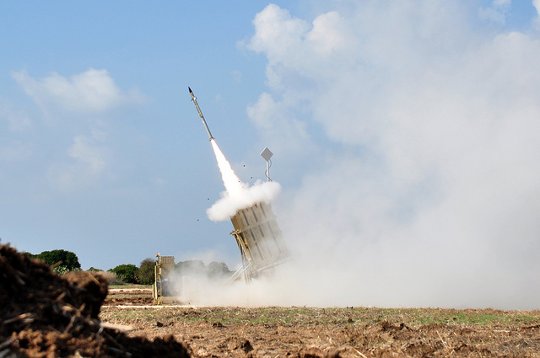 Three years have passed since the „Iron Dome” system has become a significant part of the lives of the residents of southern Israel. Since the first interception above the city of Ashkelon, „Iron Dome” batteries have been deployed across Israel and the system is considered a central layer of defense against the threat of rockets.

The military service of the combat soldiers and technicians who operate the „Iron Dome” is unique: the location of the batteries in open areas close to population centers requires dealing with field conditions that are especially complex, as their location changes on short notice depending on intelligence picture.

The operators have to deal with an intensive routine, to adapt to the front and to stay alert all the time.
„Unlike other units, we don’t have work plans that are determined ahead of time. Our activities are the result of the conduct of the enemy”, explains Lieutenant Colonel Gilad Biran, commander of the unit. „The soldiers serving in the unit are called up on short notice over and over without warning. In fact, most of the soldiers continuously spend the duration of their service on high alert”.

Because Of The Spirit

In the last three years, the unit has managed to grow and develop in all areas: from the integration of batteries and weapons to the accumulation of rich operational experience that includes hundreds of rocket-fire incidents.

„The spirit forged in the unit is what enables us to perform the complex task as efficiently as possible”, explains Lieutenant Colonel Biran
Men and women serve side-by-side in the many posts at the „Iron Dome” battery: combat soldiers, interceptors and soldiers in the technical branch-everyone is greatly influential at the moment of truth.

„It’s important to understand that the operations of the unit are not one-man show”, Lieutenant Colonel Gilad stresses. „It’s a team effort; it’s just like an orchestra, in which every player plays a certain role. Only if everyone works precisely, with vigor and to the best of his/her abilities will overall tune come out fluent and accurate”.
Someone Watching Over You

„Every single one of us feels the weight of responsibility”, says Lieutenant Colonel Gilad. „It is clear to us that there isn’t a unit similar to us in the IDF, there isn’t anyone who can do the job for us. There is a deep understanding of the meaning of our operations, we provide a clear and substantive answer to the security of the country, we protect the home and, in so doing, we save a lot of lives”.

The unit, which started its operations in the Gaza strip borders, operates on the northern border today and even on the Sinai border and its batteries are ready to be deployed at any time at any point on the map.

„It’s hard for us to expect the security reality and we are prepared for different scenarios”, he clarifies. „We are ready for the threats, but it’s important to adjust the expectations to the reality: the unit cannot provide a hermetic solution during a large-scale war. This type of solution cannot only include defense capabilities; it must also include offensive ones in addition to detection, reliable deterrence and adherence on the part of the civilian population to the instructions of the Home Front Command”.