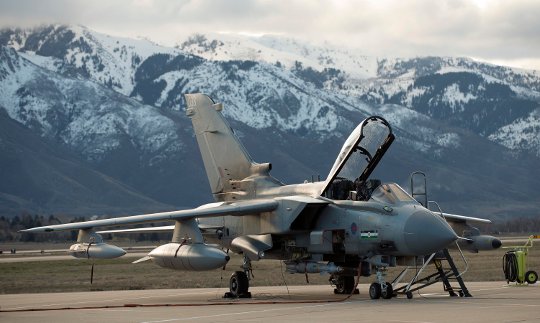 Today we would like to present a short interview with Squadron Leader David S Tait, XV(R) Sqn Executive Officer who is an experienced Torndao pilot.

Krzysztof Kuska: Could you tell us a few words about your career as a pilot? Have you always wanted to become a Tornado pilot?

Squadron Leader David S Tait: For as long as I can remember I have had a passion for aviation, and in particular military aircraft.  I enjoyed visiting air shows when I was growing-up, particularly the annual Battle of Britain Airshow at RAF Leuchars in , . Visiting this airshow and seeing high-performance aircraft display, coupled with talking to the aircrew where possible, helped to enthuse my passion.  Although aviation was a significant interest for me, I did not see it as a possible career until I was in my mid-teens.  Prior to this, I was considering a career in law, and it was only when I joined the Air training Corps (RAF Cadet organisation) that I began to realise that a career in military flying was a real possibility! I joined the RAF through a variety of school and university scholarship schemes, during which I completed my Elementary Flying Training on aircraft like the Bulldog T1 and the Grob Tutor.  My performance during this stage of training was such that I was chosen to fly Fast Jets, where I then progressed to fly the Embraer Tucano followed by the BAe Hawk T1.  Following this period of time (approximately 8 years in total, including my time completing my degree in Aeronautical engineering), I was then selected to specialise in the Low Level Ground Attack role, flying the Tornado GR4…I was absolutely thrilled!!
Being a Ground Attack Fast Jet pilot is both demanding and exhilarating.  From evading enemy fighters at 500+Kts and100ft in height; through to leading packages of 80 aircraft in complex composite operations – it is as varied as it is rewarding.  A constant challenge!

Krzysztof Kuska: You are flying in the XV(R) Sqn. Could you tell us a bit more about the Squadron and its role in the RAF?

Squadron Leader David S Tait: The Squadron is what is known as an Operational Conversion Unit (OCU), primarily the principal Tornado GR4 training squadron.  The OCU has a variety of roles and teaches a number of different courses including: Ab-Initio training, Fighter Weapons Course (Tornado ‘Top Gun’), Refresher Courses, Exchange Officer Courses, Electronic Warfare Instructors Course, and the Instrument Rating Examiners Course.  We also train our own instructors, with the course being called the Qualified Tactics Instructors Course.  We have a high entry standard to be accepted as an instructor on the OCU, which means typically that we have the most experienced and qualified aircrew in the Tornado Force.
With this in mind, the OCU holds a contingent capability, where the staff can be (and have been) called upon to help supplement and support the front-line squadrons on operations.

Krzysztof Kuska: One of the main roles of your Squadron is to train and retrain pilots. Could you highlight some of the key points of Tornado training?

Krzysztof Kuska: Tornado GR4 can perform a variety of all-weather day and night missions but I’m especially interested in Airborne Interdiction, air-to-air refueling and NOE (nap-of-the-earth) missions. Could you tell us a few words about those three types of missions?

Squadron Leader David S Tait: Air-to-air refuelling and NOE missions are a 'means to an end’….to either strike a target successfully or provide airborne reconnaissance of an area-of-interest.  Air-to-air refuelling is what we call a force multiplier – an element of air power, and a skill for pilots, to increase the flexibility of a commanders’ package by either extending the reach of his aircraft or the length of time they can remain airborne. Air-to-air refuelling is a demanding skill to learn – it is not natural to deliberately crash your aircraft into an airliner packed with 80 tonnes of fuel!  One of my many jobs is to teach student pilots how to refuel from a tanker by taking them in a Trainer Tornado (a Tornado with throttle and stick in the rear seat), and to demonstrate (from the rear seat) how to manoeuvre around the tanker and how to ‘contact’ with the basket, before allowing them the opportunity to do so from the front cockpit.
Air interdiction is what the Tornado GR4 does best i.e. strike targets precisely with measured effect, on time, in any weather.  The OCU spends a great deal of time teaching weapon-to-target matching, choosing the best delivery profile depending upon the target location/construction with consideration to air and ground threats.  The students will be assessed on their planning process with regards to these considerations in addition to how successfully they execute the mission to not only achieve bombs-on-time-on-target, but importantly to also survive the threat!

Krzysztof Kuska: The RAF have always had an image of „world’s champions of the NOE flights”. I mean especially the Cold War era when all RAF’s GR-type attackers trained NOE very intensively. How does it look like today? Do you still train extreme low level flight paths as for possible interdiction missions against the WarPac or ?

Squadron Leader David S Tait: Low level flying is a demanding skill, and it is what the Tornado GR4 was specifically designed to do – it is where the aircraft is most comfortable.  There are a number of arguments for dispensing with the need for low level flying, such as: the increased stand-off afforded to GPS munitions from medium level, or the increased use of long-range cruise missiles such as Storm Shadow.  But, the low level environment does provide an important level of terrain masking from enemy radars, and is hazardous to any enemy fighters trying to achieve a kill – both for radar acquisition, or close-up dogfighting.  We train on a daily basis down to 250ft above ground level, and with selected experienced crews (most of the OCU staff) being permitted down to 100ft above ground level in specific areas of the UK.

Krzysztof Kuska: Tornado isn’t the youngest aircraft in the RAF inventory but still it shows great capabilities. Especially when it comes to ground attack in which it can be supported by the Typhoons providing air cover. Those two aircraft can supplement each other. Do you often train with Typhoons?

Squadron Leader David S Tait: We do not normally train together on a day-to-day basis, but we learn how to complement and support each other’s activities during numerous large flying exercises throughout a typical year in both the and overseas.  Front line squadrons will practise fighter evasion on a more routine basis outside of erecises, but it is not something that the OCU routinely participates in.

Krzysztof Kuska: Tornado GR4 is widely used in many operations conducted by the RAF. Could you tell us something about the missions flown by Tornado crews in operations Telic and Herric?

Squadron Leader David S Tait: The Tornado is the most operationally experienced fast jet the RAF has ever operated, having being employed in continuous operations since Op DESERT SHIELD in 1990.  I have personally been involved in both Op TELIC and HERRICK providing CAS and reconnaissance support to coalition forces.  The sorties can vary in length from 4-8 hours and normally require 2-3 air-to-air refuelling windows to satisfy all required tasks.  In that sortie ‘window’, a crew may undertake 2-3 tasks and travel the entire length of to support Forward Air Controllers embedded with ground units, or to photograph significant areas.  Tornado crews pride themselves on their flexibility; and are ready to provide photographic imagery, a show of presence, or a precise weapon (if the situation unfortunately dictates) – day or night.