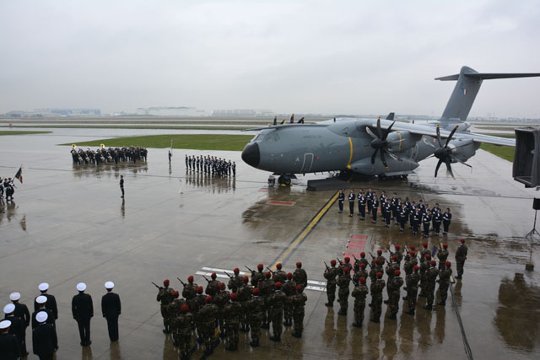 Today the second A400M new generation airlifter for the French Air Force, delivered on the 13th of November last year, was officially named “Ville de Toulouse” in a ceremony at the Airbus Delivery Centre in Toulouse. The naming ceremony was presided over by the French Minister in Charge of Veterans Affairs, Kader Arif and took place in the presence of the Mayor of Toulouse, Pierre Cohen; the CEO of Airbus, Fabrice Bregier; and the Head of Military Aircraft, Airbus Defence and Space, Domingo Urena-Raso. The photo above shows the ceremony, and the second photo attached shows Mr Cohen (left) and Mr Arif (right) below the badge of the newly named aircraft.