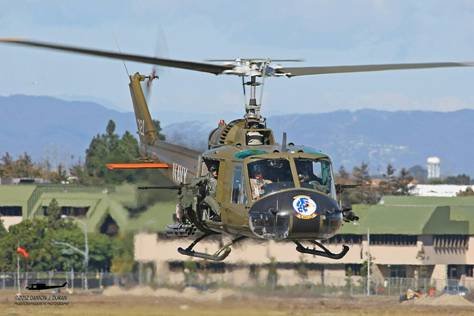 The H.N. and Frances C. Berger Foundation and the Houston Family Foundation present Army Aviation: Helicopter Warfare from Vietnam to Today presented by veteran pilot Lew Jennings. Both Army Aviation and the helicopter came of age during the conflict in Southeast Asia. From the arrival in Vietnam of the first Army helicopter units in December 1961 until the completion of the disengagement in 1973, it was America’s „Helicopter War.” In the years that followed Army Aviation’s role of providing the indispensable vertical dimension to the modern battlefield has come to be universally recognized. For example, during operations in Grenada, Panama, and the Persian Gulf region, Army Aviation played major and decisive roles. Veteran Helicopter pilot Lew Jennings, takes us on a historical journey from his days as a Huey Cobra pilot in Vietnam to the present state of modern helicopter deployment on the battlefields of Iraq. Flight exhibition by a UH-1 Huey Gunship from Wings & Rotors Air Museum.For upcoming program descriptions, visit our website

Program is included with museum admission.