“Grizzly 1” will be exhibited to inspire future aerospace generations

Nearly four years after its maiden flight, the first Airbus Military A400M new generation airlifter has been retired and is to be placed on public display.

Development aircraft MSN1 – affectionately known as Grizzly 1 – made its final flight from Toulouse on 4 November, manned by exactly the same crew that first took it airborne from Seville on 11 December 2009.

In addition, MSN3 has been placed in long-term storage in flyable condition. It is not intended to fly again but could be returned to flight-test duties if required.

The first three aircraft were produced for the core certification programme, requiring extensive test instrumentation for measuring and recording aircraft and systems performance. As that activity winds down, only one of those aircraft – MSN2 – which is fitted with the optimum instrumentation for the remaining work, is now required.

In addition, MSN4 and MSN6 (Grizzly 4 and 5 respectively) will continue to support the flight test activities, now concentrated on the further development of military capabilities, with their specific flight test instrumentation.

MSN1 ultimately flew for 1,448hr 25min in 475 flights and its final mission was a one hour sortie to validate procedures for landing with the ramp and door failed in the open position.

Discussions on its final display site are underway, led by the Airbus Heritage Department, and will lead to a decision next year. The future of the rest of the Grizzly fleet will be decided in due course.

After the flight, Chief Test Pilot Military, Ed Strongman, who commanded the first and last flights, said: “MSN1 has had a relatively short but very arduous life, and it has taken us to the extreme parts of the flight envelope where, I hope, most other A400Ms will not go.

“It has done superb service for Airbus Military and the customers who will benefit from everything that we have learned. It was a great honour for this crew to fly it first on that historic day in 2009, and it is only fitting that the same crew should say good bye to their old friend – Grizzly 1 – today. We trust it will have many more years of productive service, educating the aviation public and inspiring a new generation to seek careers in aerospace.” 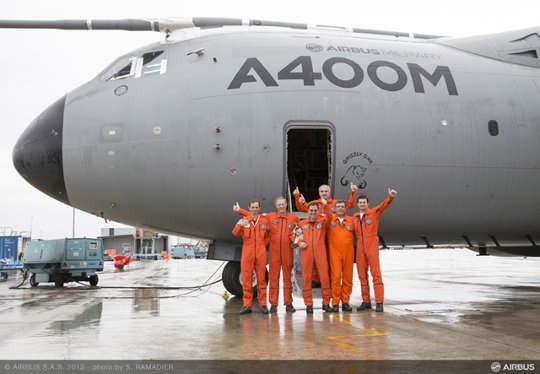