The families of two airmen killed during an aircraft crash in 1942 have been put in touch after an article appeared in the Stamford Mercury.

In 1942 Pilot Officer George Fisher and Flight Sergeant Edward Godfrey, both from RAF Wittering, were killed when their RAF Mosquito aircraft broke apart during aerial manoeuvres over Polebrook near Oundle.

Seventy years later his daughter, Mrs Christine Ogaard, a British ex-pat living in Norway, returned to visit her Father’s grave at All Saints’ churchyard in Wittering for the first time.

Naturally, Britain’s oldest newspaper took an interest in the event and published the story on 30 September 2012. No one could have known at the time that Pilot Officer Fisher’s nephew was actively researching his uncle’s history.

Edward Thornton (67) a resident of Buckshaw near Chorley in Lancashire, happened upon the Stamford Mercury’s feature whilst researching his family history and swiftly contacted RAF Wittering to see if a visit would be possible.

On 15 November 2013 Edward and his wife Irene (66) visited the grave of Flight Sergeant Godfrey, and met with the Station Commander, Group Captain Damian Alexander, who presented a certificate honouring Pilot Officer George Fisher.

Pilot Officer George Fisher is buried in Brabham churchyard near Sheffield in Yorkshire.

The visit was arranged by Warrant Officer Steve Marshall (49), who said; “Both the families have a genuine connection to RAF Wittering and it’s been a real pleasure to put them in touch with each other.”

Mr Thornton said of his visit; “It brought me closer to my uncle, a man I have always felt I knew and loved, and yet never got to know.”

He continued; “I was in awe of the reception we received and everything RAF Wittering did to make it such a memorable experience.” 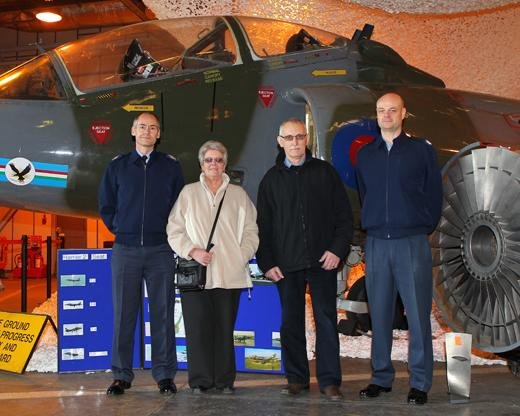