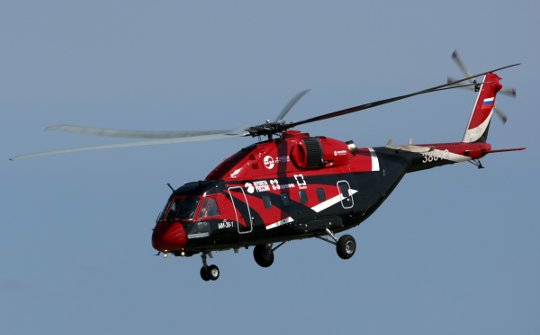 Mil Moscow Helicopter Plant, part of Russian Helicopters, a subsidiary of Oboronprom, part of Rostec State Corporation, is the winner of the Aviation Builder of the Year award for achievements in developing aircraft and components. The board of experts which judged the competition, initiated by the Union of Aviation Industrialists, a Russian non-commercial partnership, highly appraised the plant’s work on the project for the new Mi-38 cargo and passenger helicopter.
Representatives of Mil Moscow Helicopter Plant received the award on 31 October 2013, at a ceremony held in the Congress Centre of Moscow’s International Trade Centre.
The Russian Helicopters holding company, which brings together Russia’s helicopter manufacturing capacities and the intellectual potential of the famous Mil Moscow Helicopter Plant and Kamov Design Bureau, is one of the leading designers and manufacturers of helicopters in the world. Its impressive combination of unique experience and advanced solutions gives it the edge over competitors, allowing Russian-made helicopters to not only retain their traditional niches and markets, but also to widen them significantly. The company consistently invests in upgrades to its production facilities and the development of the latest technical solutions. One of the best examples of the company’s productive use of innovation is the multi-role Mi-38 helicopter project. Work on this project was highly praised by the board of experts.
The new helicopter meets the very latest standards in international aviation. It is a progressive construction, noted for the integrated architecture of its on-board equipment. The main parts of the Mi-38’s fuselage are made of aluminium alloys, and other parts and fixtures are made of steel, titanium and composite materials. The X-shaped tail rotor gives the Mi-38 excellent manoeuvrability, while the advanced construction of the six-blade main rotor ensures a high tractive force and a low vibration level. The blades are made of composite materials and equipped with an anti-icing system. The hub construction uses elastomeric bearings which do not require lubrication.
The Mi-38 helicopter can operate in a wide range of climatic conditions and can be stored outdoors. Russian Helicopters expects demand for the Mi-38 to be high in all its traditional markets. The Mi-38 is to go into serial production in 2015.