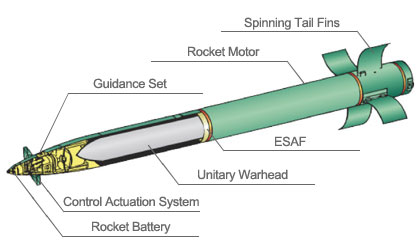 During the short-range test, three GMLRS rockets were launched from an MLRS M270A1 launcher and each destroyed its respective ground-based target approximately 17 kilometers away. This was the final engineering development flight test in the series before the program continues to production qualification testing.

„This milestone is significant because it enables us to move on to the next phase of testing,” said Wayne Wilson, GMLRS program director at Lockheed Martin Missiles and Fire Control. „Our goal is to ensure that the GMLRS program continues to meet the evolving requirements defined by our customer.”

The Alternative Warhead Program (AWP) is part of a U.S. Department of Defense plan to create a GMLRS variant designed to achieve the same area-effects as older submunitions warheads, but without the lingering danger of unexploded ordinance. The Alternative Warhead is being developed by ATK under subcontract to Lockheed Martin.

In April 2012, Lockheed Martin received a $79.4 million contract from the U.S. Army to develop AWP. Under the terms of the contract, the EMD phase of the program runs 36 months, focusing on system performance, warhead qualification and producibility.