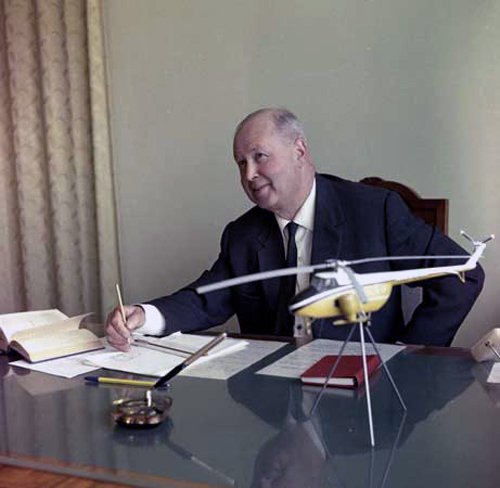 Tomilino, Moscow Region / 12 December 2012 – Mil Moscow Helicopter Plant, the world-famous designer and developer of helicopters including the Mi-8, Mi-24 and Mi-26 models, today celebrates its 65th anniversary.
Distinguished engineer Mikhail Mil in 1947 was appointed head of an experimental design bureau that over time became one of the best helicopter design schools in the world. Today the traditions of this school are being continued and developed by Mil Moscow Helicopter Plant as a Russian Helicopters company.
Created by engineers working under the leadership of Mikhail Mil and his successors, the Mil helicopter brand is truly unique. It includes the legendary Mi-8/17 series, the world’s most popular helicopter, with more than 12,000 produced over 50 years; the Mi-35M, the only military transport helicopter in its class; the Mi-26(T), the world’s heaviest-lift transport helicopter with a 20-tonne lift capacity; and the new Mi-28NE Night Hunter, which boasts unique manoeuvrability and can fly military missions around the clock in all weather conditions.
Mil Moscow Helicopter Plant has developed countless bold engineering solutions that have been put to use and served as a starting block for future unique developments. The shape of today’s helicopters is to a large degree the result of the work of this design bureau. The original design solutions developed by this team have often led to the development of other technologies in use today in Russia and other countries with a helicopter design and production capacity.
Mil Moscow Helicopter Plant is one of Russian Helicopters’ most important intellectual assets, and is a key component of the helicopter innovation cluster being established at the company’s National Helicopter Manufacturing Centre in the Moscow Region town of Tomilino. The centre is the focal point for the Bureau’s scientific, design and engineering resources. It will also be home to the Kamov Design Bureau, which is currently completing its relocation to a new modern building at the centre.
The creation of the National Helicopter Manufacturing Centre will establish a modern intellectual infrastructure for helicopter manufacturing as a part of the larger process to develop the innovation potential of the Russian economy. A single centre of excellence will allow the sector to focus intellectual resources into creating breakthrough technologies and developing the helicopters needed by state contractors and the commercial market worldwide.
Priority areas for Mil Moscow Helicopter Plant include the planned Mi-38, the Mi-171A2 and advanced high-speed helicopters. The Russian Advanced Commercial Helicopter (RACHEL), the medium advanced high-speed helicopter project presented to the global commercial market at the Farnborough International Airshow, is a breakthrough innovation that could have a profound influence on the future of helicopter manufacturing globally.
Much attention is also being devoted to the study and use of composites, which are actively being assimilated into all models, both new and previously developed. Russian engineers are working with leading global experts on international projects such as CFK-Valley Stade, the international “Carbon Valley” project studying composite materials in Germany. Such developments will add new dimensions to Russian-built helicopters, making them faster and more powerful, adding greater lifting capacity and reducing operating costs.

* * *
Mil Moscow Helicopter Plant is a Russian Helicopters company. The plant focuses on researching, designing, constructing and testing prototype helicopters. Since its establishment the plant has created 12 basic helicopter models including the Mi-8/17, Mi-35M, Mi-26, Mi-28, Mi-38 and numerous modifications. Today Mil helicopters operate in 110 countries and form the backbone of helicopter fleets in Russia, CIS and several countries in Asia, Latin America, Africa and the Middle East.

Russian Helicopters, JSC is a subsidiary of UIC Oboronprom, which in turn is a part of Russian Technologies State Corporation. It is one of the global leaders in helicopter production and the only helicopter design and production powerhouse in Russia. Russian Helicopters is headquartered in Moscow. The company comprises five helicopter production facilities, two design bureaus, a spare parts production and repair facility, as well as an aftersale service branch responsible for maintenance and repair in Russia and all over the world. Its helicopters are popular among Russian ministries and state authorities (Ministry of Defence, Ministry of Internal Affairs, Emergency Control Ministry), operators (Gazpromavia, UTair), major Russian corporations. Over 8000 helicopters of Soviet/Russian make are operated in 110 countries worldwide. Traditionally the demand is highest in the Middle East, Africa, Asia-Pacific, Latin America, Russia, and CIS countries. Russian Helicopters was established in 2007. In 2011 its IFRS revenues increased 27.8% to RUB 103.9 billion. Deliveries reached 262 helicopters.