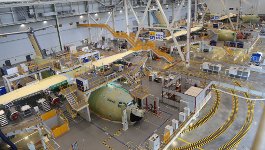 The initial three production A400M new generation airlifters are seen together for the first time in this latest image of the Airbus Military final assembly line (FAL) at Seville, Spain. The photo shows MSN7 (furthest from the camera, and first to be delivered to a customer – France) awaiting imminent installation of its engines, alongside MSN9 (centre, and the first aircraft for Turkey) and MSN8 (closest, and also for France) undergoing Ground System Tests. These tests follow once the structural assembly of the aircraft has been completed. Additionally, final assembly of MSN10, also for France, has begun at the Airbus Military facilities in Seville (Spain). All four aircraft are due for delivery in 2013.