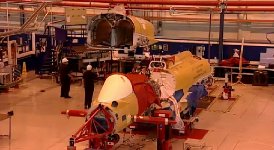 Components of the first Tranche 3 Typhoon have been loaded into the laser alignment facility based in the Typhoon Final Assembly at Warton.

Over the next few weeks, the three major components which will form the fuselage of British single seat Typhoon number BS116, will be married-up, using special automated alignment facilities which use laser-trackers and computer-automated jacks.

Typhoon is one of the most perfectly aligned fast jet airframes in the world. Although 15 metres long from tip to tip, every Typhoon that leaves BAE Systems Warton site varies from true to no more than the thickness of a match stick.

Under the Tranche 3A contract signed in May 2009, a total of 112 aircraft have been ordered for the four European partner nations, with 40 aircraft bound for the Royal Air Force. Deliveries of Tranche 3 aircraft are expected to start next year