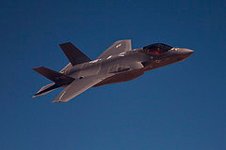 The precision component is part of the structure that attaches the aircraft’s wings to its fuselage.

It was manufactured by Lovitt Technologies in Melbourne.

It will now be shipped to Lockheed Martin in Fort Worth, Texas where it will be combined with parts from all over the world to assemble Australia’s first F-35A Joint Strike Fighter.

After a detour to Arizona for training and testing, it will be transported back to Australia in 2018 as the first of a fleet of next generation fighter jets.

“It leaves as a part and comes back as a plane – one of the most advanced fighter planes in the world,” Mr Clare said.

“This is an important day for Lovitt Technologies and dozens of other Australian companies that are currently involved in the production of the Joint Strike Fighter.”

“Australian companies have already won more than $300 million worth of work on the JSF Program,” Mr Clare said.